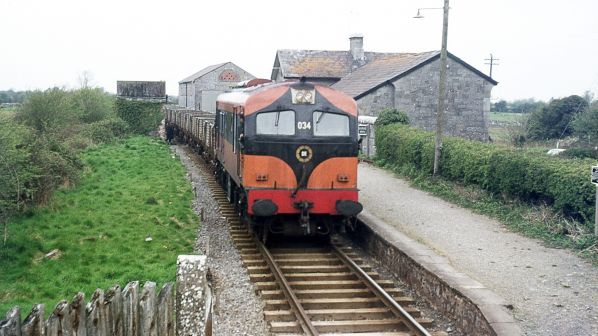 A view of an Irish Rail freight train negotiating the Limerick - Foynes line before it was mothballed in 2001.
Photo Credit: Irish Rail

IRISH Rail (IÉ) is working to restore a 42km freight line in the southwest of the country which has been out of service since 2001, with Phase 1 of the €104m project expected to be completed in 2024.

The 1600mm-gauge line from Limerick to Foynes, a major port on the south bank of the Shannon estuary, is being rehabilitated as part of IÉ’s commitment to its Rail Freight 2040 Strategy to place rail at the centre of Ireland’s freight transport system. This aims to create connections which offer Irish businesses greater opportunities to switch from road haulage to more sustainable rail transport.

IÉ says it is working to reopen the line with the Shannon Foynes Port Company in order to “deliver a reliable, frequent and sustainable logistics option for many companies that currently or in the future will use the port of Foynes.”

IÉ says that construction work, funded by with €64m from the Department of Transport, has begun on Phase 1 of the project. Work includes: vegetation clearance and removal of existing track; replacement of the track formation and laying a new ballast bed to modern IÉ standards; rehabilitation and renewal of bridges and culverts; laying new rail and concrete sleepers along the entire route; renewal of road infrastructure at public road level crossings and repair of accommodation crossings; and repair of lineside fencing.

Once these tasks have been completed in 2024, Phase 2 of the project will include: installing a signalling system on the route; installation of CCTV at level crossings; introduction of train communications system; and upgrades at Limerick and Foynes yard. Subject to funding being provided, this work is expected to take a further 18 months, with completion expected in 2025.

While the initial rehabilitation project concerns only freight traffic, some consideration is also being given to the possibility of reintroducing passenger services on the line, subject to further infrastructure upgrades and funding. The last passenger train on the route ran in 1963.

As a case in point of how such a rehabilitation can be achieved, the long-mothballed Limerick - Galway via Ennis and Athenry section of Ireland’s partly disused Western Corridor was in 2010 reopened to passenger and freight trains to improve connections along the west coast. The section from Limerick to Athenry, where the Western Corridor connects with the Dublin - Galway main line, is now included in the European TEN-T Comprehensive network.