Panama: Panama Metro broke ground on the 2.2km San Isidro - Villa Zaita extension to Line 1 on January 14. Work on the one-station extension will be carried out by the Panama North Line Consortium, comprised of OHL, Spain, and Mota-Engil, Portugal, and will be completed within 33 months. When completed, the extension is expected to serve over 300,000 residents living in North Panama. 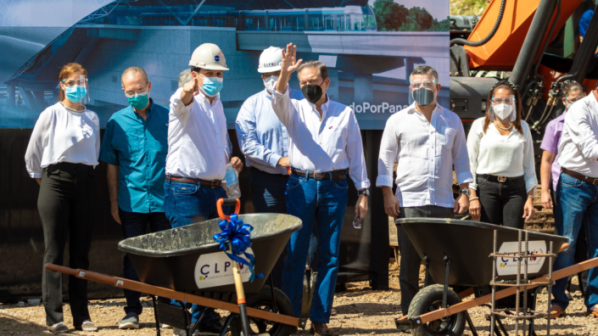 Italy: The town council of Reggio Emilia, Italy, has approved a €282.3m project to construct a light rail line in the city. The 14.5km T1 line will connect Villa Rivalta with Villa Mancasale via the city centre. Services will be provided with 16 27m-long trains with capacity for 200 passengers, servicing 29 stops.

The project is being developed through the council’s Sustainable Urban Mobility Plan (PUMS), with the council now requesting funding for the project from the Ministry of Infrastructure and Transport. If this funding is approved, the line is expected to be completed by 2026.

Spain: Adif has issued tenders for the comprehensive maintenance of 1498 passenger stations across the Adif and Adif AV networks. The contacts have a combined value of €25.4m and must be completed within 36 months. The tender is divided into six lots according to geographical location and Adif’s internal organisation.

United States: The Federal Transit Administration (FTA) has announced a $US 173m grant agreement with the Northern Indiana Commuter Transportation District (NICTD) to support the doubling of track on a 42.8km commuter line between Gary and Michigan City, Indiana, which has an estimated total cost of $US 491m.

Germany: Reconstruction of a 600m section of line north of Berlin Wilhelmsruh station is underway. The line will enable the reinstatement of services to Schönwalde and Basdorf on the Wilhelmsruh - Basdorf line from December 2023. The northern section of the line was severed by the Berlin Wall from 1961, and the remaining southern section became freight-only. The work will also include the refurbishment of 13km of the existing line to enable the reintroduction of passenger services.

Services are ultimately planned to be operated using Alstom iLINT hydrogen fuel cell powered trains, although these have yet to be ordered due to delays in applying for government funding. A fleet of Niederbarnimer Eisenbahn (NEB) owned DMUs will be used initially.

United States: The FTA has committed to providing $US 766.5m to New Jersey’s $US 1.89bn two-track, fixed-span Portal North rail bridge project. The project will replace an existing 110-year-old bridge over the Hackensack River and is expected to be completed in 2026. New Jersey Transit (NJ Transit) has entered into a Full Funding Grant Agreement (FFGA) with FTA for the project.

Most funding for the project will come from NJ Transit and Amtrak, who will contribute around $US 977m, as well as sharing operating and maintenance. The project has also received $US 57m from the Federal Highway Administration (FHWA).

Britain: Infrastructure manager Network Rail (NR) has completed a £9.8m upgrade to the approximately 22km Knaresborough - Poppleton route in Yorkshire, northern England. The work included upgrades to signalling, changes to the track layout at Cattal station to allow two trains to enter the station simultaneously, and the installation of new safety measures at level crossings along the route.

The work was carried out by NR and funded by North Yorkshire County Council and the York and North Yorkshire Local Enterprise Partnership, with support from the government’s Local Growth Fund.

Spain: High-speed infrastructure manager Adif AV has awarded contracts worth a combined €92.84m to carry out improvements to the Madrid - Extremadura line.

The first contract, worth €63.1m, covers platform works on the Malpartida de Plasencia - Plasencia Station/Fuentidueñas section in Cáceres, and will be carried out over a period of 28 months. The contract was awarded to a joint venture of Avintia, Viuda de Sainz, Gestión y Ejecución de Obra Civil y Excavaciones, and Luperko Lan Bereziak.

The second contract, worth €24m, covers the electrification of the 103.4km Peñas Blancas - Portuguese Border Bifurcation section at 25kV ac. The contract was awarded to Cobra Instalaciones y Servicios, and work will be carried out over 18 months.

The third contract, worth €5.7m, was awarded to Ferrovial Construcción for the construction of a connection between the Madrid - Extremadura line and the Aljucén - Badajoz standard-gauge conventional network line to enable high-speed trains to stop at Montijo station. Work will be carried out within one year.

United States: Amtrak, the Delaware Department of Transportation (DelDOT) and theDelaware Transit Corporation (DTC) have completed a $US 71.2m project to increase capacity on the Northeast Corridor between Wilmington and Newark, Delaware. The project included the construction of a 2.4km third track on the mainline between Ragan and Yard, as well as bridge replacements and other work. Funding came from Amtrak and grants issued to DTC from the Federal Railroad Administration (FRA), FTA and the FHWA.