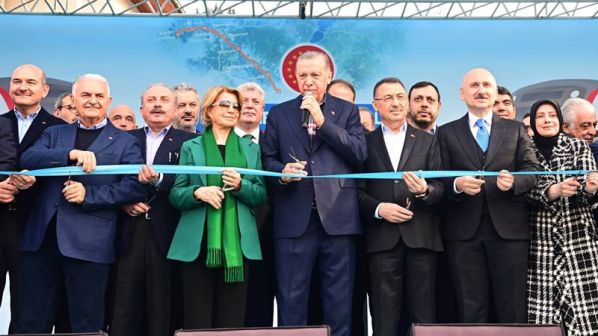 THE president of Turkey, Mr Recep Tayyip Erdoğan, has officially opened a new metro line in Istanbul which is now the fastest such line in the country, with trains running at up to 120km/h.

The 34km-long, eight-station Kağıthane - Istanbul Airport Metro, designated Line M11, opened to the public on January 22 and runs from the city to the larger of its two airports, located on the European side of the Bosphorus as opposed to the smaller Sabiha Gokcen Airport on the Asian side.

The project to build the new line saw 10 tunnel boring machines (TBMs) used simultaneously to speed up construction and the line’s opening has come just three years after the “first welding ceremony” was held.

The line has capacity to carry 800,000 passengers per day and to reduce the journey time from the Kağıthane neighbourhood, at the northern end of the Golden Horn inlet of the Bosphorous, to Istanbul Airport to 24 minutes.

The construction work was overseen by Turkey’s Ministry of Transport and Infrastructure.

Work remains in progress on further extensions of Line M11 from Kağıthane southeast to an interchange with Line M2 and bus routes at Gayrettepe, and south from Istanbul Airport via seven stations including Arnavutköy to the important Halkali railway station. Halkali is served by metro Line M1B, the Marmaray line, which runs under Bosphorous, and Turkish State Railways (TCCD) YHT high-speed trains.

Elsewhere, the 14.3km driverless metro Line 8, which runs from Bostanci to Parseller, opened earlier this month while Erdoğan reflected on progress with other lines in the city.

“With this project, Turkey has proven its strength and capability in the construction of metro lines to the whole world,” Erdoğan says. “The works on our metro line project, which will start from Arnavutköy and go down to Halkalı, are continuing rapidly. Besides [that], our work on the Bakırköy -Bağcılar, Başakşehir - Kayaşehir, Kazlıçeşme - Sirkeci, [and] Altunizade - Bosna Boulevard lines continues. When we complete all these projects, we will have increased Istanbul's rail system network to over 380km.”

For detailed data on metro projects in Europe, Asia and around the world, subscribe to IRJ Pro.