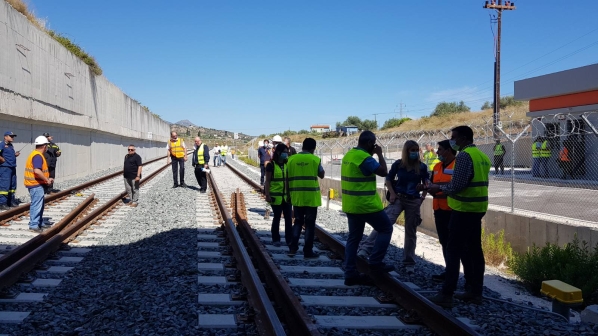 The 72km double-track section has been built for 200km/h operation and includes 14 tunnels with a total length of 12.7km as well as eight stations, 19 bridges, 63 underpasses and 10 overpasses. Metka was the principal contractor for the project, with testing getting underway in April 2019.

The final safety procedures included an exercise where fire and police personal responded to a simulated incident involving a train on fire in the middle of the 1815m-long Melissiou Tunnel.

“The aim was to familiarise all stakeholders with the new security systems in the tunnels, but also to train the staff involved in order to ensure the effective and safe handling of possible incidents,” Ergose says.

The exercise, due to be carried out in March, was put on hold due to the coronavirus pandemic.

The new section is part of the larger project to construct a double-track line from Athens to Patras, which is considered a project of significant importance as it will link the Peloponnese peninsula with the Athens rail network.

Thales supplied its Altrac ETCS Level 1 solution as well as power systems, hotbox detectors, and cabling under a contract awarded by Ergose in 2014. Thales was also responsible for the installation and commissioning of telecommunications systems.

The new line replaces the central section of the metre-gauge Corinth - Patras line, which closed in December 2010.

The project was originally expected to be completed in 2017, and the line is yet to be electrified.