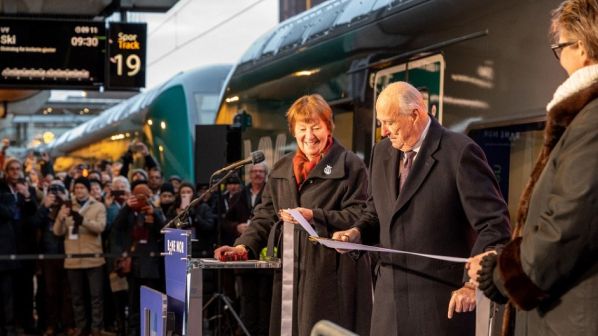 KING Harald of Norway has officially opened the new 22km, 250km/h Follo Line running through the Nordic countries’ longest tunnel which has cut journey times on the Oslo - Ski route by 50% to 11 minutes.

The Follo Line runs parallel to the Østfold Line and part of the aim of its construction, which began in 2015, has been to increase capacity in the bottleneck between Oslo and Ski while also allowing the Østfold Line - which connects Norway with Sweden - to be upgraded to a high-speed line. Another aim is to increase rush-hour commuter ridership by 63% and to reduce car journeys in the area.

As a result of the new line opening, the train service operated by Vy between Ski and Oslo Central has been increased to a total of 112 departures per weekday from the previous 71 per day. The new R23 Follo Line shuttle service runs through the Blix Tunnel with no intermediate stops every half hour on weekdays between 06.00 and 19.00 and then with hourly departures until midnight and on Saturdays between 11.00 and 19.00.

With the increase in capacity, the service on the  Østfold Line has been doubled from two departures per hour to four, with these services being the only trains to run through the Oslo Tunnel and call at all intermediate stations.

Work began on the Blix Tunnel in September 2016 and tunnelling was completed on February 26 2019. Although the tunnel length is around 20km, the choice of separate bores for each track raised the total length of bored tunnel to 36km.

Tunnel construction was carried out by a joint venture led by Acciona and Gheller (AGJV) under a contract awarded by infrastructure manager Jernbaneverket (now Bane Nor). There were 18 subcontractors, including AF Group, Turboconstroi, Copuno, Herrenknecht, Actyon, Elecnor, Hæhre, Peab and Mammoet. Challenging geology and the cancellation of some key contracts with Condotte of Italy, which ran into financial difficulties, both raised the cost of the project and extended completion beyond the original December 2021 target.

As part of the Follo Line project, extensive track renewals and remodelling was carried out between Oslo Central and the tunnel portals at Ekebergåsen. Ski station has been completely rebuilt with three platforms and a public transport interchange. The project is expected to cost a total of NKr 36.8bn ($US 3.7bn).