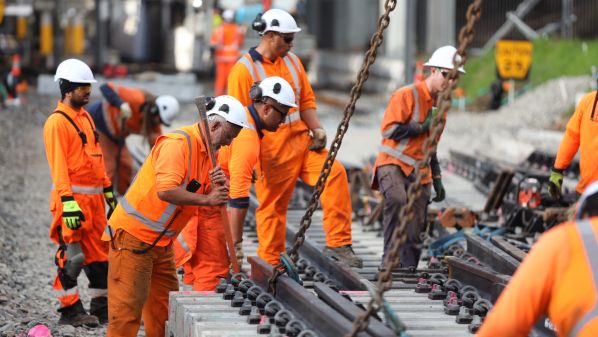 KiwiRail has replaced around 110km of track.
Photo Credit: KiwiRail

NEW Zealand national railway KiwiRail has completed a two-week shut down of Auckland’s eastern line between Britomart and Ōtāhuhu, as part of a wider track replacement programme across the Auckland network.

The project was launched after testing found that rolling contact fatigue (RCF) was more widespread across the network than previously thought, resulting in services being limited to 40km/h. KiwiRail initially announced in September 2020 it needed to replace more than 100km of track, with this since increasing to 134km.

A KiwiRail spokesperson says it has now replaced 110km of rail and 19,800 sleepers, 82% and 92% respectively of the overall work required. KiwiRail is also using two hi-rail grinders from Speno Rail Maintenance Australia and Autech, Australia, to undertake the renewal work.

The Auckland network carries more than 22 million passengers each year, along with more than six million tonnes of freight.

KiwiRail began seeing more widespread RCF on the Auckland network in 2017, and in early 2018 established a technical working group with Auckland Transport (AT) to investigate the root causes of the problems and to identify infrastructure and rolling stock solutions. In 2019, additional funding was provided by the government to allow a more intensive approach to resolving the issue through enhanced track inspections and the accelerated replacement of rail, additional rail grinding and the introduction of new testing technology.

Eddy current and phased array testing, launched at the start of 2020, found that the issue was more widespread than initially thought, resulting in the acceleration of the track renewal project.

KiwiRail says it has only found isolated instances of RCF on other high-use areas of the national network, such as the Wellington commuter network and the East Coast Main Trunk line between Hamilton and Tauranga. A working group has been established with representatives from KiwiRail, AT and international consultants to investigate why RCF is more prevalent in Auckland than elsewhere in the network.

“We are continuing to work with AT to investigate the cause of the rolling contact fatigue, as well as the best long-term maintenance solution so future asset management ensures issues like this aren’t repeated,” the KiwiRail spokesperson says.