Report warns project could be delayed or scrapped but local authority vows to see it completed. 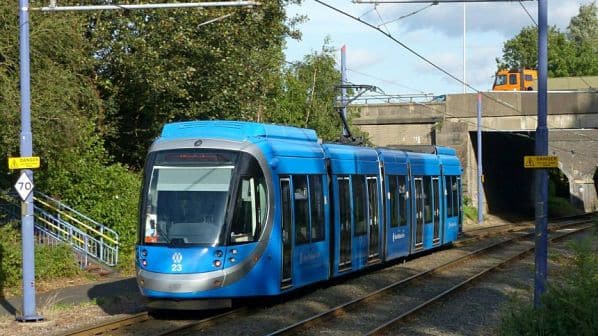 There are warnings that it may be some time before West Midlands Metro trams like this one can travel to Dudley and Brierly Hill.
Photo Credit: Alan Murray/geograph

A report from Britain’s Dudley Council has warned that a light rail extension project to connect the town with the major West Midlands centres of Birmingham and Wolverhampton is “extremely likely” to be delayed or scrapped due to rising costs and a lack of available funding.

However, the report also warns that further delays or withdrawal of commitment from the scheme would have huge consequences for plans and investment strategies in the borough.

“We will continue to work with the West Midlands Combined Authority (WMCA) on securing the necessary funding to see this project through to completion,” says councillor for regeneration, Mr Simon Phipps, before adding that the authority is determined to finish the project.

The 11km extension is planned to run from Wednesbury on the existing Birmingham - Wolverhampton line south to Dudley and Brierley Hill following the course of a disused railway and was announced by the WMCA in June 2016. The line will provide a connection between the area and the new HS2 high-speed line being built between Birmingham and London.

The extension is being promoted as potentially attracting investment and regeneration to the Sandwell, Dudley and Brierley Hill areas, while improving access to public transport as well as air quality and reducing noise levels.

Birmingham mayor, Mr Andy Street, said earlier this year that the extension should be completed by 2024. And while 300m of track is now reportedly in place at Castle Hill in Dudley, Birmingham City Council’s leader, Mr Ian Ward, told a WMCA meeting in October that due to the impact of rising inflation and rocketing interest and energy costs there was no money available for the extension. The latest report appears to support this assertion.