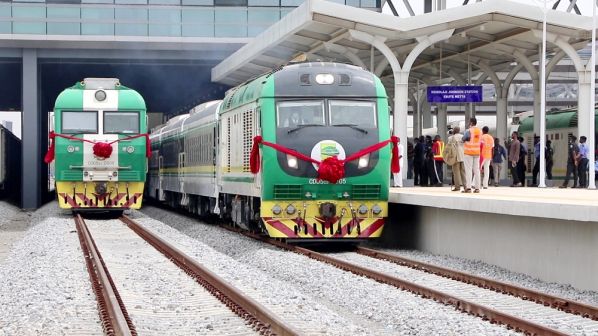 The 150km/h line, which also has a 7km branch, was built by the China Civil Engineering Construction Corporation (CCECC), with support from the 11th and 12th Bureau of China Railway (CR), the Bridge Bureau, the Electrification Bureau and the 4th Railway Institute. The $US 1.5bn project was funded by the Export-Import (Exim) Bank of China. CCECC says the line is currently the longest double-track SGR in Africa.

Construction of the line faced several challenges, including the Covid-19 pandemic, a tight schedule, complex environment, and limited construction resources. The line provides a connection to the Port of Apapa in Lagos, creating a new economic corridor through the country.

Buhari says the Nigerian government plans to prioritise rail as the backbone of the country’s transport network to improve industrial and economic activity. He highlighted the opening of the Abuja - Kaduna line in 2016, the Abuja light rail network in 2018, and the Itakpe - Warri line in 2020 as examples of the country’s emphasis on rail.

“This vital line establishes an end-to-end logistic supply chain in railway transport within its short corridor, Lagos - Ibadan, as goods to the hinterland would now be transported by rail directly from the Apapa Port straight to the Inland Container Depot located in Ibadan from where it can be distributed to other parts of the country,” he says. “I commend the minister of transportation, Rotimi Amaechi, for his drive and tenacity in achieving the milestone recorded today, and also the wonderful team in the Ministry, for a job well done.”

The Lagos - Ibadan line is part of a wider $US 6.7bn project to build a line to Kaduna in northern Nigeria, which was approved in 2018 and is also being built by CCECC. Earlier this month, the Nigerian government allocated funds to cover the cost of the Kano - Kaduna section following delays by the Exim Bank of China to approve a $US 5.3bn loan for the project that has been pending for close to two years.