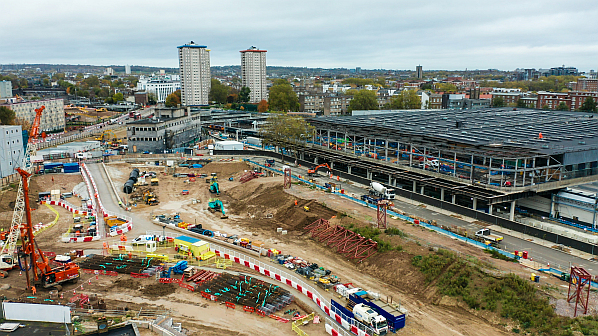 THE London terminus of Britain’s new high-speed line will now only have 10 platforms instead of the originally planned 11 HS2 minister Mr Andrew Stephenson told the British parliament on October 20 during his third six-month update on the project covering the period from February 2021 to October 2021.

This will reduce capacity at the rebuilt London Euston station from the originally planned 18 trains per hour to 17. Stephenson claimed that the reduction creates a less complex, more efficient design which can be built in a single stage and yet still support the full operation of the HS2 network. “We are continuing to explore opportunities for greater integration between the HS2 and Network Rail stations through The Euston Partnership and to optimise the oversite development above the Euston terminus.” Further details will be confirmed in his next update in six months’ time he added.

The projected completion date range for Phase One remains 2029 to 2033. However, Stephenson warned that HS2 Ltd has identified some potential minor delays in the southern section of the line and tunnels leading into Old Oak Common station in west London from outer London. He said there is a focus now to identify efficiencies and control risk in these key areas. The most notable risks include residual delays in completing enabling works and handover to main works in certain locations, slower than planned design progress and securing planning consent by the main works civils contractors that are limiting the productivity of the supply chain and the consequential impacts of Covid-19 which continues to cause disruption.

Stephenson said that following Royal Assent of the Phase 2a High Speed Rail Bill on February 11, the completion date range for that section, from Lichfield, north of Birmingham, to Crewe, has been set to 2030 to 2034. It had been planned to open this section at the same time as Phase One.

As for the eastern leg of HS2, which is planned to run from the Birmingham to Leeds, he said: “we will soon publish the Integrated Rail Plan (IRP) for the North and Midlands which will set out how we will deliver and sequence HS2 Phase 2b, Northern Powerhouse Rail and other major rail schemes, such as Midlands Rail Hub, to ensure transformational rail improvements and benefits are delivered to passengers, businesses and communities more quickly.” IRP was due to have been published by December 31 2020. There is still no official date for its publication and concern has been raised by bodies including Transport for the North that the eastern leg may be cancelled.

Construction of the new HS2 high-speed line between London and Birmingham continues across 340 separate worksites with 97% of companies working on the project being British-registered according to Stephenson.

Key achievements for the HS2 project, Stephenson said, included the support of more than 20,000 jobs and 2,200 business, launching the first tunnel boring machines to construct 16km tunnels in the Chiltern hills and the start of construction of the ‘superhub’ HS2 station at Old Oak Common in west London.

Stephenson says HS2 remains within budget. He told parliament that the overall budget for Phase One, including Euston station, remains at £44.6bn. This is composed of the target cost of £40.3bn and additional government-retained contingency of £4.3bn. The target cost includes contingency delegated to HS2 Ltd of £5.6bn for managing risk and uncertainties.

To date, £12.9bn has been spent from the Phase One budget, with an additional £1bn for land and property. Stephenson said £12.4bn has additionally been contracted, with the remaining amount not yet under contract or drawn as contingency. He added that the first £15m of the £4.3bn contingency has been allocated and this is to increase the number of trains that Old Oak Common station can service from three to six per hour.

Phase 2a’s revised delivery plan is based on an updated cost range of £5.2bn-£7.2bn, with arrangements to be formalised in the Comprehensive Spending Review (CSR) due on October 27.

Stephenson confirmed that HS2 Ltd is currently reporting future potential cost pressures of around £1.3bn, which is up from £800m in February. Key cost pressures, he said, include £600m for the slower than expected mobilisation of main civils contractors for Phase One, associated with delays to enabling works handovers, design approvals and securing of planning consents. £400m pressure on Euston cost estimates remain from last February, however Stephenson said the move to a  eliminate one platform station is expected to reduce these cost pressures.

A further £150m cost pressure has been reported for works on the existing Euston rail network required to facilitate the new station. However, Stephenson also reports that more than £300m has been identified in savings on Phase One.

The financial cost of Covid-19 on the project has risen from £400m to £700m based on the extended duration of restricted working practices that are now anticipated to run until the end of the year.

As for the delayed award of the rolling stock contract, with Siemens currently challenging the process, Stephenson said: “There have been various legal challenges to the rolling stock process, but we expect the contract award to be in the autumn subject to there being no further challenges. It is not expected that this delay will affect the planned opening of Phase One services.”

HS2 Ltd confirmed on October 20 that there were three shortlisted bidders for the 57.9km Phase 2a Design and Delivery Partner (DDP) contract from Lichfield to Crewe.

The shortlisted bidders are: