Remodelling will include areas of public space, better links to other transport and active lifestyle and energy-saving initiatives. 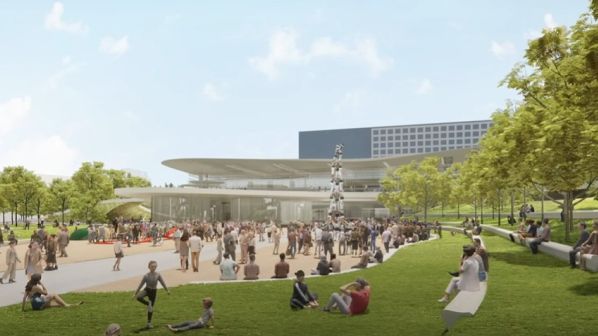 A still from a promotional video showing how the remodelled Barcelona-Sants station will be surrounded by areas of public and green space.
Photo Credit: Adif AV

SPAIN’S minister of transport, mobility and urban agenda, Ms Raquel Sánchez, has unveiled a project to expand and improve Barcelona-Sants station, which involves transforming and rearranging the passenger building, and improving public entrances to offer better connections to surrounding communities, the Plaça de Països Catalans and the city’s other transport links.

At the request of the authorities in the local area, part of the aim is to create more public space as well as encouraging intermodal public transport connections and creating walking and cycling routes to encourage the active health of the city’s people and to benefit the environment.

Sánchez says the proposed station transformation will have an estimated cost of €410m, including VAT, and will be funded by the country’s Recovery, Transformation and Resilience Plan (PRTR). The amount of public space created will be 155,000m2, of which 68,000m2will be used for pedestrian areas and cycle lanes.

There will also be new areas of green space and the commitment to decarbonisation will include the installation of 14,000m2of photovoltaic panels on the new roof, the use of residual heat from the railway tunnels and the inclusion of natural ventilation on the platforms. Another feature will be a robotic parking area, replacing traditional car parking and also catering for bicycles and scooters.

“Until now Sants was not a station for its neighbours,” says Sánchez, who was accompanied on her visit to Barcelona by president of Adif and Adif AV, Ms María Luisa Domínguez, and mayor of Barcelona, Ms Ada Colau. “Looking around it is easy to understand that this space is a gap in the fabric of the neighbourhood,” said Minister Sánchez, “With this reform we are going to remedy the situation. The new Sants will have more access and it will be more friendly. We are going to create an unparalleled civic space, because it is what the neighbourhood has asked us to do..”

The station is currently served by  Ave, Avlo and Ouigo high-speed trains, while Iryo will begin running trains from the station in November. The goal is that by 2030 58 million people passengers a year will be using the station, compared with the current 46 million.