The new line offers a 2h 22min journey time between Madrid and Orihuela. 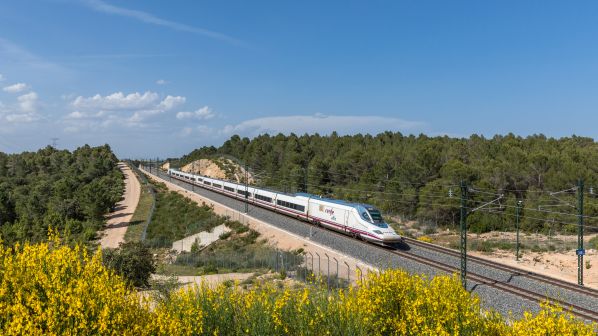 The new double-track line branches off from the Madrid - Alicante high-speed line at Monforte del Cid and has one intermediate station at Elche. The line is electrified at 25kV 50Hz, with a design speed of 350km/h and is equipped with ETCS Level 2 and Asfa train control and protection.

Renfe will initially offer two high-speed express services per direction per day on the route, with a journey time of approximately 2h 22min, but will increase the frequency in accordance with public demand and Covid pandemic restrictions.

Services will employ a fleet of 300km/h first-generation Talgo class 102 trains, offering 316 seats per train. The new line will reduce Madrid - Orihuela journey times by around an hour compared with other options.

The line is the first phase of a high-speed line to Almeria. Construction is currently underway on an additional 23.6km section from Orihuela to Murcia. However, no timetable has been confirmed yet for the opening of further extensions beyond Orihuela.