75,000 passengers per day are expected to use new station in the east of the city. 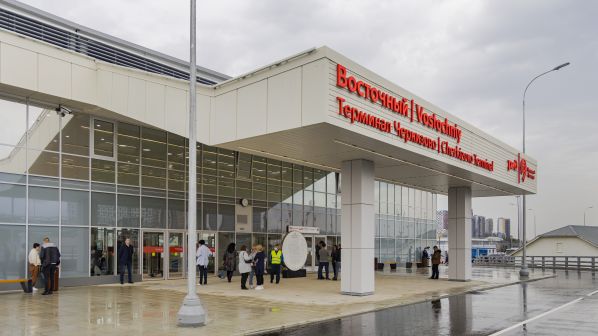 The first new long-distance station in Moscow for a century.

A new station has opened at Vostochny in eastern Moscow, the first new long-distance station in the Russian capital for a century.

This will increase capacity by 75,000 passengers per day, of which 25,000 are expected to use long-distance services. It is hoped that the new station will relieve pressure on the busiest section of the Moscow - Kurskaya - Kalanchevskaya line.

The station forms part of a transport hub with more than 100 alternative routes available including via the metro, Moscow Central Circle (MCC) and surface transport, says deputy mayor of Moscow for transport, Mr Maksim Liksutov.

The new station is built on the MCC and unites Cherkizovskaya station (part of the Sokolnicheskaya metro) and surface transport.

The facility is served by 48 long-distance trains, with 20 of them fast trains running from Strizh/Lastochka to Nizhny Novgorod/Ivanovo. The remaining 28 operate on lines from Moscow to the south of Russia.

The station is 9600m² including a 4200m² passenger terminal. . It features platforms with different heights; one for Talgo trains and the other for Siemens Lastocka EMUs.

A waiting hall with 200 seats has been built, equipped with USB-chargers, storage facilities, ticket offices, a food court and mother and child rooms.

The new station also improves access to the capital’s airports with journey times of under 30 minutes now possible.