The tenders have been withdrawn twice before due to the complexity of the project. 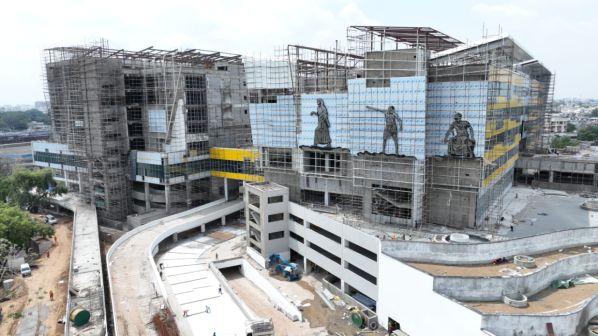 Work is in progress on the high-speed station in Sabarmati in Gujarat state.
Photo Credit: NHSRCL

Two previous attempts to float the project have failed. The first, in 2019, witnessed a lack of interest among civil engineering contractors while the second in November last year was cancelled because of the land was not available to build the Tunnel Boring Machine (TBM) launch shafts alongside the high-speed line.

However, after the Bharatiya Janata Party emerged as an alliance partner of the new Maharashtra government in August, the National High Speed Rail Corporation Limited (NHSRCL) says administrative and institutional obstacles have now been overcome.

Three TBMs will be used to construct a 16km tunnel, while the New Austrian Tunnelling Method (NATM) will be used for the remaining 5km. The undersea tunnel - the first in India - is proposed as a double-track single-bore tunnel

The tunnelling packaged being tendered, known as C-2, includes the construction of 39 equipment rooms at 37 locations. The tunnels will typically be between 25m and 65m deep, with the deepest point to be 114m below the Parsik Hills near Shilphata.

The contract will be let in two stages. Tenders for the first stage can be submitted until January 19 2023, with the bids to be opened the following day. A pre-bid meeting has been scheduled for  October 21. If the contract targets are met, financial bids will be opened in the second quarter of 2023 and preliminary construction work can begin by the end of 2023.

The contract is due to be completed within five years and two months of it being awarded. A tender for the C-3 package to build a 135.45km section to connect Shilphata with Zaroli in Maharashtra state is expected to be launched later this year. In past months, the state government has been able to fast track the land acquisition process and now has 72% of the 433ha required.

All the land required for the MAHSR route in the Union Territory of Dadar and Nagar Haveli (DNH) has been acquired, with 98.8% acquired in Gujarat.

A tender for the C-1 package to design and construct the underground station at the Bandra Kurla Complex in Mumbai - including a 467m cut and cover section and a 66m ventilation shaft - was launched on July 22, with bids to be submitted by October 20.

For detailed data on high-speed projects in India and around the world, subscribe to IRJ Pro.