GERMAN infrastructure manager DB Networks has announced that electrification of the Munich - Lindau line via Memmingen will be completed by December 2020, with much of the 155km route operational by July 1. 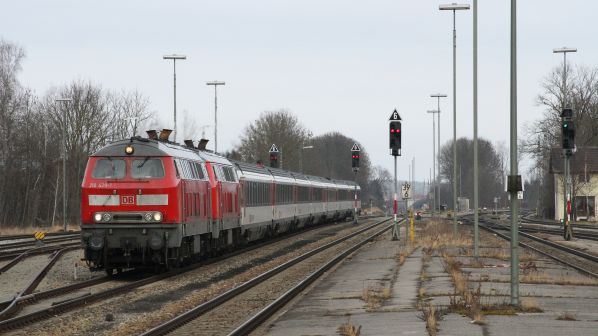 Work began in 2018 and will be completed on schedule, after continuing throughout the coronavirus pandemic. When complete, 238km of track will be electrified 15kV ac, costing around €440m.

The route includes 107km of single track between Buchloe and Hergatz which has been reconstructed to allow operation at 160km/h for tilting trains, from a maximum of 80km/h previously. DB Energy has also built a 100km long 110kV electricity supply line due to the lack of existing electrified railways in the region.

Swiss Federal Railways (SBB) will operate RABe 503 Pendolino tilting EMUs on the line for its Munich and Zürich international service from December. Journey times for the service are expected to be reduced by an hour to 3h 30min.

The reduced journey times are due to the removal of the need to switch from diesel to electric locomotives at Lindau and the use of tilting trains, allowing journey times between Munich - Lindau of less than two hours.

DB Regio will also operate electric regional trains on the line from December until the end of 2021, when Go-Ahead takes over operation with a fleet of new Stadler Flirt EMUs.

International services will also use a formerly freight-only connecting line which runs from the main Lindau terminus to a new passenger station at Lindau-Reutin from December 2021. This mean that trains will no longer need to reverse.