The reports were commissioned following the Stonehaven derailment last summer. 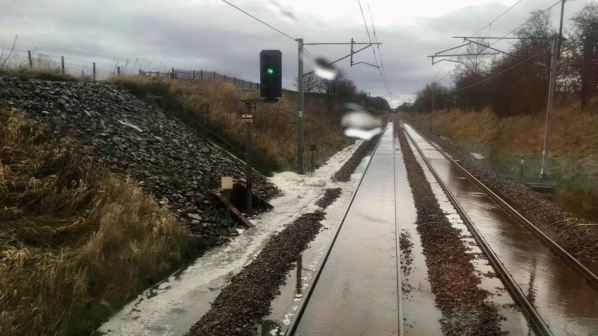 The Earthworks Management taskforce, led by geotechnical engineer Lord Robert Mair, and the Weather Advisory Task Force (WATF), led by meteorologist Dame Julia Slingo, were commissioned by NR following the fatal derailment in Stonehaven, Aberdeenshire, in August 2020. The derailment was found to have been caused by a landslip following intense rainfall.

The reviews, which were presented to transport secretary, Mr Grant Shapps, offer an independent assessment of current practice and expert guidance on how to improve rail safety and performance as climate changes.

“These findings will inform our work as we push ahead with measures to make our railway more resilient in future, and less vulnerable to sudden tragedies like that near Stonehaven,” Shapps says.

The earthworks review found that most trackside earthworks in Britain were built around 150 years ago and were poorly designed by modern standards. The earthworks were found to be overly steep and unstable, and equipped with ageing drainage installed to a pre-set design which did not account for catchment areas, run-off and water flow and which was generally not designed as a slope stabilisation measure. It also noted that replacement drainage over the years has typically been like-for-like, with no attempts to enhance drainage.

However, the reviews found it impractical to fully reconstruct almost 200,000 slopes across the network of this type, along approximately 32,186km of track.

The reviews commended NR’s work to upgrade existing Victorian-era infrastructure and manage risks across the network. NR says that investment in resilience work has almost doubled in the past decade as systems, technology, standards and practices have been upgraded or newly introduced.

The reviews also note that resilience work has been accelerated since last summer, with new technologies being trialled more widely across the network, including dynamic, route-based weather forecasting in collaboration with the Met Office.

Between 2019 and 2024, Network Rail will invest £1.3bn to strengthen the railway’s resilience to extreme weather. The government’s Spending Review has also committed £40bn as part of efforts to increase investment in rail infrastructure.

However, both reviews highlight that significant work is still necessary, and outlined a series of recommendations to improve network resilience. NR says that it is currently reviewing the recommendations and has already implemented some.

NR has also retained both Mair and Slingo to act as mentors and provide links to their network of engineering and scientific peers as longer-term recommendations are considered and implemented.

NR says that some recommendations, such as the implementation of systems to provide detailed information on the location of intense, short-term rainfall, and sensors to provide early detection of failures on critical slopes, have been trialled. However, the reviews recommend accelerating the rollout of these measures and keeping abreast of new developments.

Both reviews recommend that NR upskill its workforce to better access, interpret and use weather data and technology. They also recommend carrying out inspections and examinations of earthworks and drainage, as well as ensuring consistent general improvements to knowledge and competencies across the organisation.

“Heavy rain caused ground slips on many occasions across the entire network last year and although tragic accidents are thankfully incredibly rare and none other than Stonehaven caused injuries, it is clear that extreme weather presents a significant challenge to the way we safely and reliably manage railway infrastructure,” says Mr Martin Frobisher, NR’s safety and engineering director.

“We will carefully consider every single recommendation and develop a science-backed improvement plan, to target available money and technology in the best possible way.”

The NR reports build on the British government’s own Resilience of Rail Infrastructure interim report, which was commissioned immediately following the Stonehaven incident and published in September 2020.

An independent investigation by the Rail Accident Investigation Branch (RAIB) into the Stonehaven incident is also ongoing, with RAIB due to publish its full findings later this year.