NETWORK Rail (NR) has awarded ESG Rail and DB Systemtechnik (DBST) a contract to supply overhead line monitoring technology to enhance the existing monitoring fleet. As part of this contract, passenger vehicles will also be used to monitor the network during normal revenue operation. 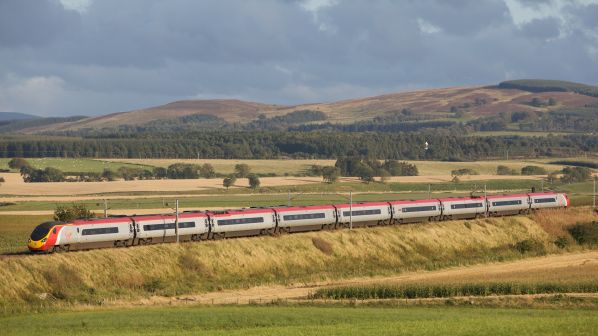 The line monitoring technology will be installed onto system onto a class 390 Pendolino EMU to cover the West Coast Main Line.
Photo Credit: Robin Ralston

DBST will provide the overhead line monitoring equipment, which is similar to that already being used by DBST and ESG for testing and commissioning of new train fleets on British infrastructure.

ESG says the system has the capability to measure a number of interface attributes, most notably contact force, as well as contact wire height and stagger. There are also a number of other supporting data channels that will be collected during operation.

The focus will initially be to deploy two monitoring systems onto NR’s Mobile Electrical Network Testing, Observation and Recording (Mentor) test coach, following which ESG will install a single system onto a class 390 Pendolino EMU to cover the West Coast Main Line, which will provide data on a daily basis via normal passenger train service operation. The regular collection and assessment of asset condition data will support NR’s ambition to move towards a predict and prevent maintenance strategy.

The monitoring system will measure the force between the contact wire and pantograph carbon strips, via high-fidelity sensors mounted directly on the pantograph head. All sensors will be subject to a thorough calibration process at DBST’s laboratory in Munich, Germany, before they are deployed in Britain.

Under the programme the Mentor system will enter operation towards the end of 2019, with the class 390 deployment scheduled to start a few months later. All three systems will be fundamentally the same. However, additional equipment will be fitted onto the class 390 to allow for the fleet’s tilting capabilities.

“As well as enabling a transition to more predictive maintenance regimes, this contract is the starting point for NR’s strategy to use in-service passenger vehicles to make dynamic measurements of the overhead line at line speed, something that isn’t possible using just Mentor, which is limited to 160km/h,” says NR mobile monitoring principal engineer, Mr Kevin Hope.