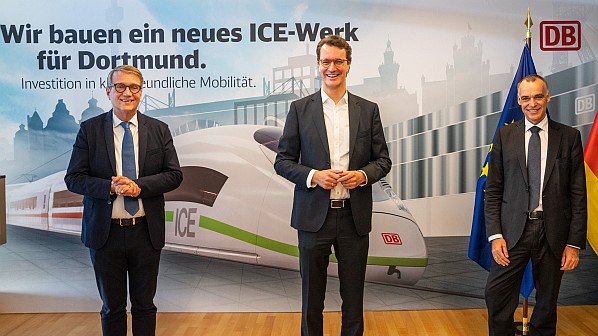 German Rail (DB) has announced plans to construct a €400m ICE maintenance facility in Dortmund, which is expected to create up to 500 additional jobs. The facility is being built on the site of a derelict freight yard to the west of the city.

Preparations for the approval process will begin this year, and the plans will be presented to the public in the first half of 2022. Construction is scheduled to begin in 2025, with operation starting in 2027.

The 450m-long maintenance hall will have capacity to manage up to 17 trains a day on four track, and will operate in a CO2-neutral manner.

DB plans to invest €8.5bn in expanding and modernising its long-distance fleet, including purchasing 167 new ICE3 and ICE4 trains. Nearly €2bn will be spent on the construction and expansion of maintenance facilities for long-distance trains by 2030.

“For the mobility turnaround, we need an efficient railway,” says DB passenger transport director, Mr Berthold Huber. “That's why we have to set the course today for the growth and quality of tomorrow's fleet. The new plant in Dortmund is an important building block for this."

Dortmund already has an ICE depot as well as one for the maintenance of regional trains. Today, DB employs more than 3000 people in the city.

The site of the new ICE depot, near the city’s harbour, is ideal says DB Infrastructure director Mr Ronald Pofalla because it uses existing railway land which significantly shortens the planning and construction time.  “This year we are investing almost €1.9bn in North Rhine-Westphalia’s infrastructure alone,” he says. “With the €400m investment in the new plant, we are once again strengthening the important railway state of NRW.”