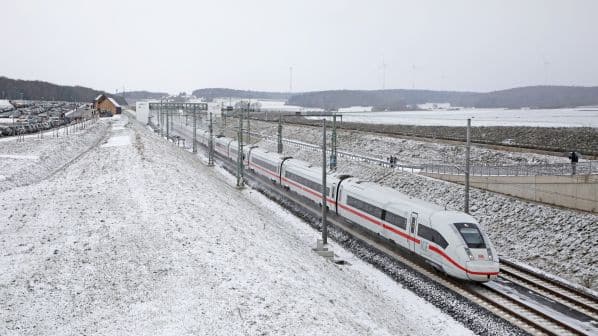 A DB ICE4 on the new high-speed line at Merklingen on December 11.
Photo Credit: Keith Fender

Following its formal opening by infrastructure manager DB Network on December 9, the 60km high-speed line from Wendlingen and Ulm carried its first commercial services on December 11.

The new line has a maximum speed of 250km/h and over 26km of tunnels. Construction began in 2010 as the first section of the high-speed line from Stuttgart to Ulm, which will open in full when the new underground main station in Stuttgart enters service from December 2025.

For the interim period trains use the existing route from Stuttgart to Plochingen, and from there secondary line to Wendlingen. Here a single-track connection is used to reach the high-speed line, which from 2026 will be used by freight trains.

The Wendlingen - Ulm high-speed line has ETCS Level 2 Baseline 3 signalling. Trains not equipped with this must use the conventional route from Wendlingen to Ulm, which applies to older German Rail (DB) ICE trains as well as French National Railways (SNCF) TGVs operating to Munich.

The conventional line must also be used when ETCS on the high-speed is not fully operational, as happened on the first day of operation.

The new line has a single intermediate station serving the town of Merklingen and its surrounding area. The new station is served hourly by 200km/h regional trains operated by DB Regio between Ulm and Wendlingen.

From the completion of high-speed infrastructure to Stuttgart, these trains will be replaced by Alstom Coradia Stream EMUs on order for Baden Württemberg leasing company SFBW.

The EMUs are progressively replacing class 650 DMUs on the RB63 Herrenberg - Tübingen - Reutlingen - Metzingen - Bad Urach service, and have been transferred from Bavaria where they formerly worked Regional Express (RE) services between Augsburg and Munich.

In the longer term, the Bad Urach branch will become part of the planned Neckar-Alb tram-train network.

GoAhead began operation of its second Bavarian contract on December 11, covering a range of services centred on Augsburg including the RE service formerly operated by DB Regio.

The contract covers the operation of 7.4 million train-km a year and runs until December 2034. For its new contract, GoAhead ordered 12 five car Desiro HC and 44 three-car Mireo EMUs from Siemens Mobility.

Each part double-deck Desiro HC EMU has 500 seats in standard class and 38 in first class. Two trains can operate in multiple to provide a total of 1076 seats on routes such as Munich - Augsburg that are particularly busy.

However, deliveries of the new trains have been delayed due to what Siemens described to local media as “many major challenges [that] were not foreseeable,” including supply chain issues following the Covid-19 pandemic and the war in Ukraine.

GoAhead, like most operators in Germany, has also faced staff shortages. Before the contract started it had proposed to operate buses instead of trains on one inter-regional route serving Aalen and Donauwörth for several months.

Following intervention by the transport authorities that let the contract, an interim solution has been found with DB Regio and private operator Weser Ems Railway (WEE) sharing rail services.

While the full contracted timetable is not being provided across the network, this has been done on a planned basis rather than resorting to short term cancellations, which has won grudging acceptance from passenger groups.

GoAhead said in a press statement that the first day of operating the new Bavarian contract went well, apart from some “teething problems” and especially issues with the new trains.