$US 14bn first phase of project to double capacity between New York City and Newark. 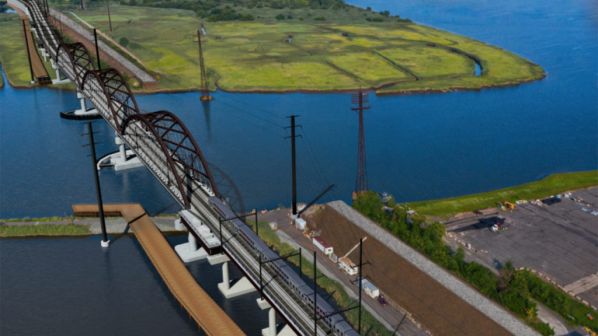 An impression of the new Portal North Bridge which will replace at trouble-prone swing bridge dating from 1910.

THE governors of New York and New Jersey have signed a Memorandum of Understanding (MoU) outlining sources, deployment and timing of funding from the two states for the Portal North Bridge and Hudson Tunnel projects on the Northeast Corridor (NEC).

The MoU covers the $US 14bn first phase of the Gateway Programme, which will eventually double rail capacity between Newark, New Jersey, and New York.

A new Portal North Bridge will replace a swing bridge built by the Pennsylvania Railroad in 1910 which is now prone to mechanical trouble and a frequent source of major delays to New Jersey Transit (NJT) and Amtrak services on the NEC.

In April, a Notice to Proceed was issued to the Skanska/Traylor Bros PNB Joint Venture (STJV), which will build the bridge under a $US 1.56bn contract. The project is expected to take approximately five and a half years to complete.

The Hudson Tunnel project, costing $US 12.3bn, includes construction of a new double-track tunnel on the section of the NEC from Bergen Palisades in New Jersey to Penn Station in New York City.

The Hudson Tunnel project consists of three major elements: the Hudson Yards right-of-way preservation project, a new Hudson Tunnel, and the rehabilitation and modernisation of the existing North River tunnel.

In June Amtrak, in partnership with NJT and in coordination with the New York Metropolitan Transportation Authority, entered into a $US 73m, two-year contract with a team led by Arup to begin designing options for Gateway Programme extensions and additions to the existing tracks, platforms and concourses in Penn Station.

The current tunnel system is 112 years old and was damaged in 2012 by Superstorm Sandy. Around 450 New Jersey Transit and Amtrak trains use the tunnels each weekday, and before the Covid-19 crisis hit there were about 200,000 daily passenger journeys through the tunnels.

In January, the project received a medium-high rating from the FTA Capital Investment Grants (CIG) programme. Phase I of the Gateway Program will be funded by a combination of federal and local sources, according to the governors’ offices. On behalf of the two states, the Port Authority of New York and New Jersey’s total commitment is $US 2.7bn.

Federal funding sources are expected to cover around 60% of the Portal North Bridge cost; the states of New York and New Jersey will each contribute $US 386.2m, making a total combined contribution of $US 772.4m. For the Hudson Tunnel project, the states will similarly split the local share 50-50.

New York governor, Ms Kathy Hochul, welcomed the funding agreement for the Gateway Hudson Tunnel Project as being vital to achieving the states’ aims for the NEC and making good on their promises to modernise state infrastructure and create a mass transit system worthy of New Yorkers.

New Jersey governor, Mr Phil Murphy, welcomed the agreement as a pivotal milestone towards what he called the most significant transport project in the entire United States. He said that as well as being in line with the Biden Administration’s infrastructure and transport priorities the project would lead to New Jersey being better connected and positioned to reap the economic benefits of its position at a regional crossroads.

Hochul and Murphy recently nominated Mr Kris Kolluri to serve as CEO of the Gateway Development Commission, a partnership between the two states and Amtrak that is working with the PANY/NJ and New Jersey Transit (NJT) to coordinate delivery of the Gateway Programme.