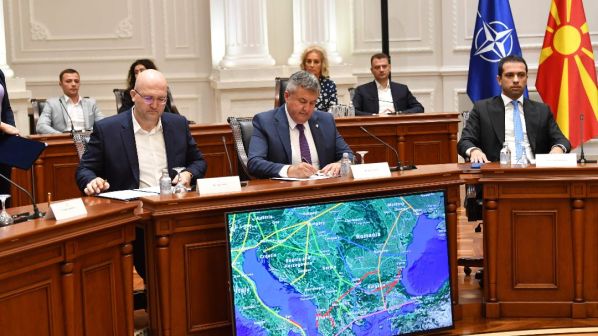 NORTH Macedonia has awarded contracts worth €200m to build two sections of Pan-European Railway Corridor VIII and renew a section of Corridor X.

Strabag will build the Kumanovo - Beljakovce section of Corridor VIII, while Gülermak will build the Beljakovce - Kriva Palanka section towards the Bulgarian border. The project includes the construction of a single-track electrified line with 14 stations and 12 bridges.

Strabag will also renew the 31km Negotino - Nogaevci section of Corridor X, with the project to take six months.

Minister of transport and communications, Mr Blagoj Bochvarski, said the 31km Kumanovo - Beljakovce project will cost €40m and will be built by 2024, while the 34km Beljakovce - Kriva Palanka line will cost €155m and be completed by 2025.

The Kumanovo - Kriva Palanka line will be financed by a €68.5m grant from the European Union’s (EU) Investment Framework for the Western Balkans and a loan from the European Bank for Reconstruction and Development (EBRD).

The director of North Macedonia infrastructure manager HRMV Infrastruktura, Mr Hari Lokvenec, says more than 50% of the funding for the construction of the final section from Kriva Palanka to the Bulgarian border has been secured, with EU committing to provide a €155m grant through the Western Balkans framework, as well as €61 through the EU’s Instrument for Pre-Accession Assistance (IPA) programme.