Improved lines could be served by battery or hydrogen trains. 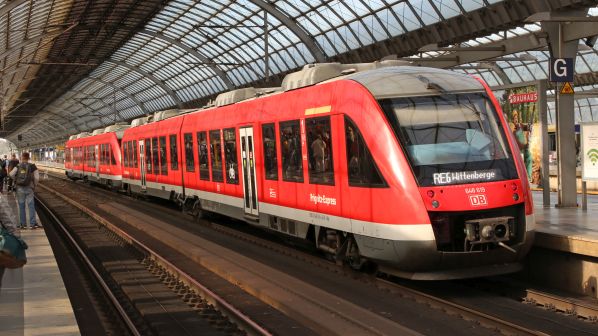 THE states of Berlin and Brandenburg have signed a €6m financing agreement with German Rail (DB) for detailed planning of the project to rebuild and expand the North Rail line connecting Berlin Gesundbrunnen with the soon-to-be extended Heidekraut railway route from Berlin-Wilhelmsruh.

The relatively small infrastructure works are designed to facilitate through trains from the Prignitz region of northern Brandenburg direct to Berlin Gesundbrunnen as well as enabling Heidekraut trains to access central Berlin.

A second main line track is planned on the 3km section from Bornholmer Strasse and Berlin-Schönholz. A further 1.3km section between Berlin-Schönholz and the junction for the Heidekrautbahn at Berlin-Wilhelmsruh will be built either as single or double track. Reconstruction of the Basdorf - Berlin-Wilhelmsruh section of the Heidekraut railway is already underway, due for completion by December 2024.

The project is likely to be completed by 2030 and will be electrified at 15kV ac.

The plans are part of the Berlin/Brandenburg i2030 programme and include the introduction of battery or hydrogen trains to replace DMUs on the Prignitz and Heidekraut routes.

The Berlin-Schönholz - Hennigsdorf route, which will be used by Prignitz Express services, is currently only served by third rail S-Bahn trains. Expansion of capacity on the section of this route between Berlin-Schönholz and Berlin-Tegel is also being evaluated as part of the i2030 programme. The new battery or hydrogen trains will share tracks with the S-Bahn service between Berlin Tegel and Hennigsdorg/Velten, operating two trains each way per hour.

DB Long Distance has begun a public consultation for the construction of a new ICE stabling and minor servicing depot on the former Berlin-Schönholz freight yard site.

The new €46m, eight-track facility, planned as part of the Deutschland Takt regular interval timetable, is planned to open in 2026.