The plans include the completion of capacity-boosting schemes as well as continued work on several major infrastructure projects. 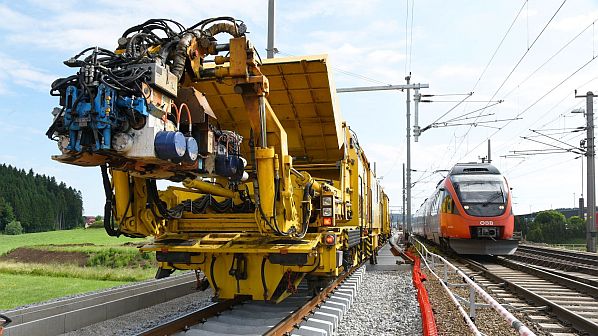 AUSTRIAN Federal Railways (ÖBB) plans to invest €2.90bn across its network in seven regions in 2022 as part of its €18.2bn five-year investment plan in the rail network, announced on November 3. This covers the period from 2022-2027.

The country’s eastern region will receive €870m, the largest investment which includes funding for a four-track extension of the southern line from Meidling to Mödling and on upgrades to the connecting line between Hütteldorf and Meidling to enable the S80 service to operate every 15 minutes between Vienna Hütteldorf and Vienna Aspern Nord. The newly renovated Matzleinsdorfer Platz station will begin operating in April, while platforms at Vienna Haiderstrasse will be renewed. Additionally, work on Franz-Josefs-Station will continue throughout the year. Various maintenance is also planned on the S-Bahn line between Vienna Meidling and Vienna Floridsdorf.

In Lower Austria, the double-track expansion and electrification of the route between Vienna and Bratislava, Slovakia, will be completed ahead of the introduction of the new timetable in December. Work on the full double-track expansion will start in parallel this summer with the electrified and continuous double-track connection between the two capitals. Work has already begun on track doubling of the Vienna section of the Pottendorfer line while construction is underway on the Münchendorf - Wampersdorf section including the new Ebreichsdor station.

The expansion of the Northern Railway between Vienna Süßenbrunn and Berhardsthal in Lower Austria, which will create shorter journey times for trains travelling to the Czech Republic, Poland and eastern Germany, will begin. The first phase will be Vienna Süßenbrunn - Gänserndorf while plans for the next section to Bernhardsthal will be submitted for environmental impact assessment.

ÖBB says the majority of the planned €599m investment in the Tyrol region will be spent on the construction of the 55km Brenner Base Tunnel linking Austria and Italy although this will not open before 2031, four years later than planned.

Other projects include opening of the upgraded Rum station this autumn, which features a new LRT stop and barrier free access as well as a direct connection between regional services. Telfs-Pfaffenhofen station is being redesigned with the main work beginning in the spring. This includes not only passenger improvements but also infrastructure upgrades for switches and signals.

ÖBB plans to invest €572m in Styria, with the southern route through the region a particular focus for 2022. Work is underway on the Koralm tunnel while progress will continue on the construction of a new underground route at Graz Airport and ÖBB says the structure is more than half complete. The modernisation of Mehring station is due to be completed in May, while the renovation of Peggau-Deutschfeistritz station continues. Similar work at Wartberg will begin this year.

In the Carinthia region, as part of a €349m investment, the new station at St Paul im Lavanttal is taking shape while electrification of the Lavant Valley Railway and Bleiburg Loop will continue. Once complete passengers will be able to travel between Graz and Klagenfurt in 45 minutes. As part of the electrification, the Maria Rain station is being modernised and a new Kottmannsdorf Lambichl station is under construction. Platforms at Klagenfurt Süd and Weizelsdorf stations will be extended. The plan is for the project to be complete by 2023.

Elsewhere the modernisation of Arnoldstein station continues while Mallnitz-Obervellach station will be made barrier free.

ÖBB is investing €287m in the region in 2022 including the four-track expansion of the western line between Vienna and Salzburg, which will create more capacity. The expansion between Vienna and Linz Kleinmünchen is already complete and further work is concentrated on the Linz - Wels bottleneck. Construction began on the Marchtrenk - Wels section last November and this is now operational, while work to increase capacity on the Linz - Marchtrenk section is due to start this year. The final section of a continuous four-track western route between Vienna and Linz, east of Linz Central station, is due to be completed this year.

In the Bosruck tunnel, the renovation of overhead lines and the tunnel’s inner structure will be conducted this year, allowing the tunnel to remain operational for another 20 years.

The Salzburg region is receiving a €164m investment in 2022, with work continuing on the upgrades and electrification of the line between Neumarkt am Wallersee and Freidburg. The work already completed enabled the introduction of improved timetables in the region from December, and the remaining work will be completed by the spring. Electrification to Friedburg is seen as the prelude to the extensive modernisation plans for the Mattig Valley Railway.

ÖBB will spend €61m in the region including beginning the renovation of Hypobank stationin Bregenz which will be made barrier-free. The expansion of the S-Bahn network will also be completed, with new stations at Hard-Fußach and Lauterach Unterfeld due to open in the summer.

Under a major maintenance plan for the region,new track and switches will be installed at Arlberg. Slope stabilisation and protection against avalanches and rockfalls is planned for the Lochwald area.

For data on infrastructure projects in Austria, subscribe to IRJ Pro.