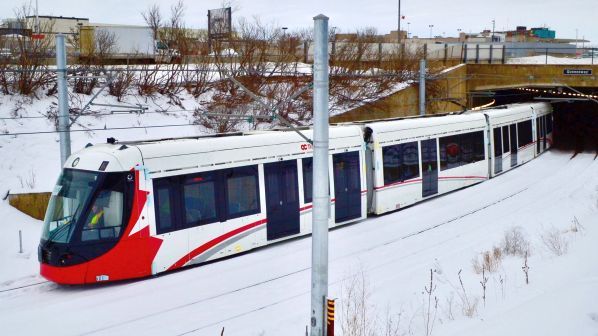 An Alstom Citadis LRV on the part of the Ottawa LRT Confederation Line which is already operational.
Photo Credit: OLRT

CONSTRUCTION of the western extension to Ottawa Light Rail Transit’s (OLRT) Confederation Line has been hit by delays that have pushed back its expected completion date by 17 months to the end of 2026.

Completion of the Trillium Line southern extension, which is due to open in September 2023, has already been delayed by a year.

Giving a quarterly briefing on progress with Phase 2 of the LRT programme to members of the city council’s Finance and Economic Development Committee, Ottawa’s director of rail operations, Mr Michael Morgan, blamed the delays on labour shortages and supply issues.

“We’re seeing a lot of pressure on the availability of craft and there’s been some challenges - there’s a shortage of cement in North America,” Morgan said.

The Confederation Line extension is being built by the East-West Connectors (EWC) joint venture, which won the contract in 2019 with a tender of $C 2.57bn ($US 1.89bn). In April, when EWC first reported there was likely to be a 101-day delay to the handover of the extension, it blamed the complexity of tunnelling work as well as a shortage of concrete and of reinforcement steel, along with difficulties in recruiting sufficient labour.

When asked by city councillor, Mr Riley Brockington, whether there had been a “realistic timetable at the beginning” given “there was going to be bridges built and other work in this regard,” Morgan reiterated that supply chain problems had been mainly to blame. He said that together with other members of the construction team, he had quickly adapted to circumstances to overcome these challenges as far as possible.

When the western extension of the Confederation Line is completed, it will be maintained by Rideau Transit Maintenance (RTM), a partnership of ACS Infrastructure Canada, EllisDon and SNC-Lavalin who as Rideau Transit Group (RTG) built Phase 1 of Ottawa’s LRT system and as RTM continue to maintain it.

In 2019 TransitNEXT, a wholly-owned subsidiary of SNC-Lavalin, won the contract to build and maintain for 30 years the southern extension of the Trillium Line. It won the tender after offering a fixed-price contract worth $C 663m, with SNC-Lavalin providing $C 136m as an upfront private deferred contribution.

Meanwhile, a public inquiry is continuing to investigate the cause of the derailments and breakdowns that hampered the completed first stage of Ottawa’s LRT project. The inquiry is expected to release its final report at the end of this month.

In 2020, a year after the opening of the first phase of the Confederation Line, cracks were identified in the wheels of the Alstom Citadis Spirit LRV fleet and a reduced timetable had to be introduced while the problem was investigated.

For detailed data on light rail projects in Canada and around the world, subscribe to IRJ Pro.