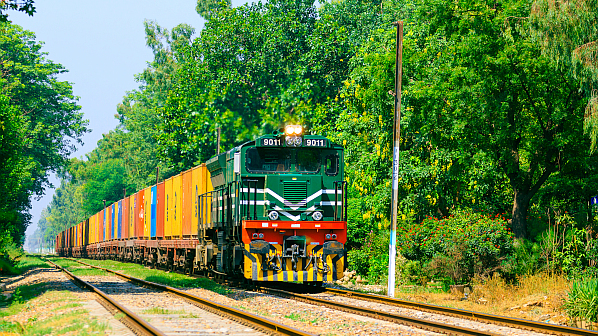 Plans for a standard-gauge railway would improve Pakistan's connectivity with Europe and Iran.
Photo Credit: Shutterstock.

PAKISTAN Railways (PR) is working on plans to construct a 635km standard-gauge line from Quetta to Taftan on the Pakistan-Iranian border.

The Dawn newspaper reports that the proposed railway would support the transport of high-value goods to Europe and Central Asia. Trains on the Islamabad - Tehran - Istanbul route currently take around five days to complete the journey, with the newspaper quoting sources suggesting that this is because of the condition of the track. It is claimed that a standard-gauge line would reduce journey times to 20 hours.

The project is reported to cost $US 500m but requires approval by the Ministry of Railways.

Dawn also reports that the Pakistan Ministry of Railways may request Iran constructs a 95km standard-gauge line from Taftan to Zahedan, Iran, to connect with the Taftan - Quetta railway.

During the 11th Economic Cooperation Organisation (ECO) transport ministerial meeting, hosted virtually by Turkey from January 31 until February 2, Iran minister of transport and urban development, Mr Rostam Ghasemi, used his speech to propose that the ECO Secretariat and Pakistan work to attract investment from banks and international organisations to build the Quetta - Tafton line and its train fleet.

For detailed data on infrastructure projects across Asia, subscribe to IRJ Pro.