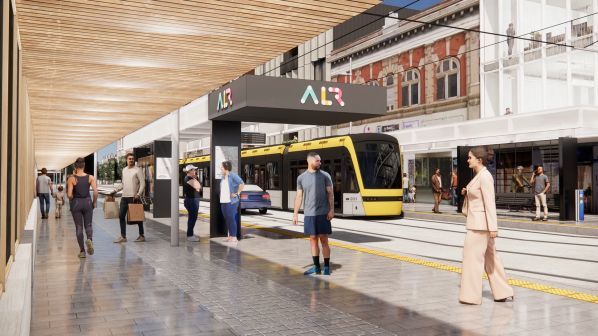 An image giving an impression of how a street-running section of Auckland Light Rail will look when operational.
Photo Credit: ALR

PROJECTS aiming to transform public transport in New Zealand’s largest city have taken a leap forward with the announcement of preferred bidders to plan and design the next phases of Auckland’s expanding network.

Expressions of interest for both projects were invited in May after the New Zealand government had confirmed its chosen route for ALR in January.

Waka Kotahi, New Zealand’s national land transport agency, and its partners Auckland Transport and Auckland Council have now named Aurecon and Arup as preferred bidder for the next phase of ALR.

“ALR will be 24km long - half of it underground - connecting people to work and study at job centres in the city and at Auckland Airport,” says ALR project director, Mr Tommy Parker. “Light rail will be frequent, quicker, safer and more reliable, halving travel times between the central city and most destinations on its route.”

Two separate contracts have also been awarded by ALR: Atkins NZ (SNC-Lavalin) will work with Aurecon and Arup to develop the operations and maintenance strategy for the light rail line, and the law firms Buddle Findlay and Simpson Grierson will progress the legal work for ALR.

“The ALR alliance will work on a final route for light rail and proposed locations of up to 18 stations,” says Parker. “It will also develop light rail’s final Corridor Business Case, building on the Indicative Business Case developed by the Auckland Light Rail Establishment Unit, as well as look at how the system will be built and prepare for the consents needed for construction.”

Services will operate every five minutes and have capacity for up to 15,000 passengers per hour. The route will include a tunnel from Wynyard Quarter to Mount Roskill, and will then continue above ground to the airport by running parallel to the S20 highway.

Meanwhile, an alliance of WSP, Beca, Systra and Cox Architecture has been named as preferred bidder for the next phase of the Waitematā Harbour Connections project.

“Waitematā Harbour Connections will investigate connections for all modes, to shape the future of the city, the region and beyond in partnership with mana whenua (local leaders),” says Waka Kotahi transport services general manager, Mr Brett Gliddon. “By mid next year, the Waitematā Harbour Connections team plans to deliver a recommendation for a package of transport improvements as part of an Indicative Business Case.

“This will encompass all modes including light rail, buses, connections for walking and cycling, vehicles and freight, along with determining the future use of the Auckland Harbour Bridge. These long-term solutions will require significant investment and involve complex large-scale construction, anticipated to take more than 15 years of design and construction work.”