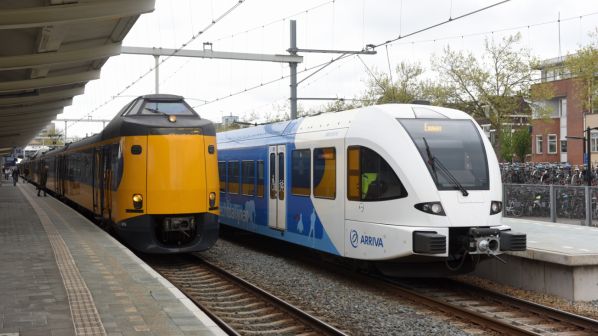 The line is used by NS and Arriva services.
Photo Credit: Quintus Vosman

DUTCH infrastructure manager ProRail has completed a project to quadruple the congested line between Zwolle and Herfte junction in the north of the Netherlands, with trains running along 4km of upgraded infrastructure from July 24.

The line, which from Herfte splits to Meppel, Leeuwarden/Groningen and Emmen, was previously used by four Netherlands Railways (NS) IC, two NS Sprinter regional and two Arriva regional trains every hour, along with peak hour passenger services and freight trains.

The €270m project, which began in August 2019, was mainly financed by the Ministry of Infrastructure, with the provinces of Overijssel, Friesland, Drenthe and Groningen providing €40m. The project is part of the €1bn North Netherland project to improve rail connections within the north of the country and between the northern and western regions.

A bi-level crossing has been built at Herfte junction to allow trains to Emmen to cross the Zwolle - Meppel line without affecting capacity on that line. Arriva services travelling between Emmen and Zwolle can now also access the terminal platforms 15 and 16 at Zwolle station without disrupting Zwolle - Meppel services.

The track layout at Zwolle station, in particular the eastern part, has been changed to improve connections with the quadrupled line, with platforms 15 and 16 widened to increase capacity.

Following the completion of work, the half-hourly Leeuwarden - Meppel NS Sprinter service will be extended to Zwolle, with four IC and four Sprinter services now operating hourly between Zwolle and Meppel.

Zwolle, as the major access point to the north, is a bottleneck and has undergone major changes in recent years to cope with increasing service frequencies and passenger numbers. The Zwolle - Lelystad Hanseatic line opened in 2012, requiring considerable expansion to the station. The Zwolle - Kampen and Zwolle - Wierden lines have also been electrified and upgraded, enabling higher train frequencies on the latter one. A bus terminal has also been opened behind the station.