Electrification systems procurement deadline for the full 870km line has also been extended. 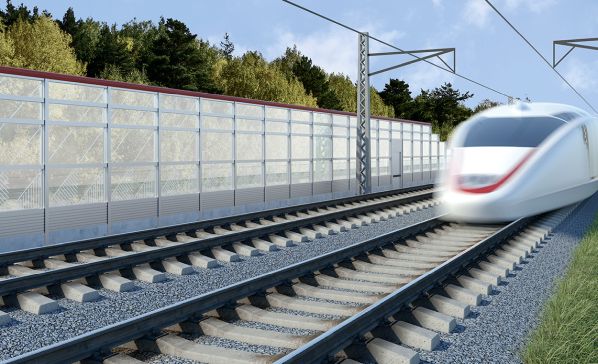 A CGI impression of how a Rail Baltica high-speed train and infrastructure will appear when the ambitious project is completed.
Photo Credit: Rail Baltica

FIVE of the six organisations that participated in the first round of tendering for construction of the 265km Latvian section of the 1435mm gauge Rail Baltica high-speed line, have been found to be compliant with EU standards and been invited to participate in the second round.

The five bidders are:

Documentation preparation works for the second round, in which applicants are required to submit their financial and technical offers, is now underway and once the tender process is completed it is planned that work on the project will start outside Riga in 2023. Priority construction works will be carried out on the section from Riga Airport to the Lithuanian border and the Salaspils Intermodal Freight Terminal.

The first construction works that are planned, however, are in Bauska Municipality near Iecava, where the future Rail Baltica infrastructure maintenance facility will be located. During the building of Rail Baltica, this site will be used as a construction logistics base, connected to the existing 1520mm gauge network.

Once the construction logistics base is in place, the next works likely to be undertaken are the tasks requiring the greatest level of engineering and technical complexity: the bridges over the Iecava and Mēmele rivers.

“The positive experience we’ve had so far with the competition since attracting experienced and well-matured construction companies is a significant factor in further implementation of the Rail Baltica project,” says Mr Kaspars Vingris, chairman of European Railway Lines (EDZL) which is project manager for Rail Baltica in Latvia.

“Engaging an international and experienced association of contractors in the construction of high-speed railway infrastructure will also significantly contribute to strengthening of knowledge and competences in the Latvian construction sector. The planned construction works are combining many elements, such as railway baselines, bridges, roads and overpasses, infrastructure maintenance points, regional stations - a complicated field of work to build a complete new railway line within the shortest possible time.”

Meanwhile, the deadline for submitting bids to design and build the energy subsystem for the electrification of the entire 870km Rail Baltica route has been extended by RB Rail to September 14.

At the beginning of 2021, RB Rail carried out a tendering process to select a service provider for the engineering part of the project’s energy subsystem deployment, with an association of DB Engineering & Consulting, IDOM Consulting, Engineering, Architecture, and Italferr announced as the winner.

The Rail Baltica high-speed electrification procurement process was subsequently launched on June 1 2022 and is considered to be the largest single electrification scheme in Europe to be implemented as a single project.

The procurement procedure is being carried out in two stages, and is due to be concluded by the end of 2023. The energy subsystem comprises: high-voltage connections between the public grid and traction power substations, catenary and the energy control system.

The double-track Rail Baltica route will require 2000km of catenary, around 4350 tonnes of copper materials, and 50,000 catenary masts.

“Considering the scope and complexity of the electrification project and the complexity of the tender, the timeline for submitting applications has been extended until September 14,” says Mr Kristjan Piirsalu, chief procurement officer at RB Rail.

“While we do not expect that this decision would have an impact on the general procurement timeline, extra time would allow all potential suppliers and partners to ensure higher-quality submissions for the qualification stage and to ensure sufficient alignment with potential future partners.”