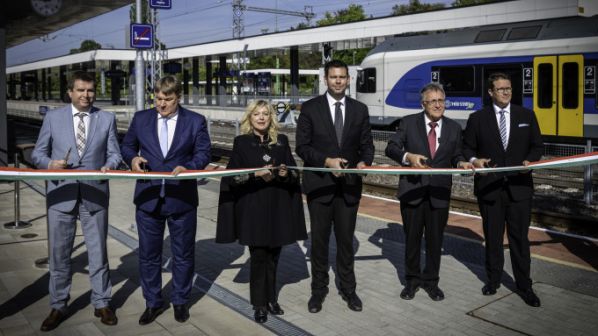 HUNGARIAN infrastructure manager MÁV Zrt has announced the completion of an upgrade of the 53km line between Rákos on the eastern outskirts of Budapest and Hatvan.

Work has included track renewals for operation at up to 160km/h, a comprehensive station refurbishment and rebuilding programme, and installing lineside and telecommunications equipment for ETCS Level 2 signalling.

The upgrade has cost a total of Forints 160bn ($US 380m), provided by the government’s national infrastructure development agency NIF Zrt from domestic and European Union sources.

The upgrade of the 25.2km Rákos - Gödöllő section was carried out by a consortium of Strabag Vasútepító and Belfry PE under a contract worth Forints 62.27bn.

Stations at Rákosliget, Rákoscsaba-Újtelep, Rákoscsaba, Gödöllő-Allami telepek, Pécel and Isaszeg have been refurbished with 550mm high platforms, new platform canopies and accessibility improvements including the installation of lifts and tactile paving to assist visually-impaired passengers.

A total of 203 parking spaces have been created at new park and ride facilities between Rákos and Gödöllő.

The contract for the 27.3km section between Gödöllő and Hatvan was awarded to Swietelsky Vasúttechnika for Forints 64.46bn.

Work here included the complete rebuilding of Gödöllő station, and the refurbishment of Máriabesnyő, Bago, Hévízgyörk, Galgahévíz, Tura and Aszód. A total of 216 park and ride spaces have been provided.

Signalling and telecommunications work for the Rákos - Hatvan line upgrade was undertaken by Ground Transportation Systems under a contract worth Forints 23.79bn.

This included the installation of electronic interlockings, passenger information and CCTV systems. Two remote control centres have been installed, together with a centralised operations control system, and a new telecommunications equipment building has been provided at Hatvan.

MÁV Zrt says that once ETCS Level 2 installation is completed and approved by the railway safety authority, operation at speed of up to 160km/h will be possible between Aszód and Hatvan.

The Rákos - Hatvan upgrade has also been undertaken to increase capacity for freight and more frequent commuter services.

An associated project involves the provision of a third track between Budapest Keleti station and Kőbánya felső, which is being undertaken by R-KORD under a contract worth Forints 9.79bn.

According to MÁV Zrt president and CEO, Mr Zoltán Pafféri, the Rákos - Hatvan upgrade is one of largest railway investment projects recently undertaken in Hungary.

“Choose public transport, because it is comfortable, economical, safe and, what is very important, an environmentally-friendly solution compared to private transport,” Pafféri says.

“All in all, we have completed the implementation of an extremely complex project, as this net investment of Forints 160bn is a very serious amount in terms of railway development,” says Mr Zoltán Nyul, deputy general manager for investment at NIF Zrt.