THE Netherland Ministry of Infrastructure and Water Management and the Municipality of Amsterdam have announced an updated tendering structure for the Zuidasdok project. 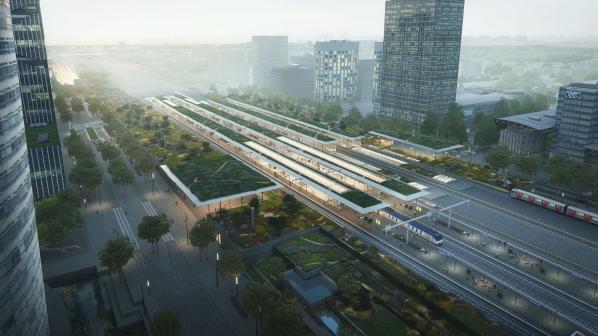 Part of the Zuidas development in central Amsterdam, the Zuidasdok project envisages developing Amsterdam South station into a compact public transport terminal, connecting train, light rail, bus, taxi and bicycle services. The A10 South highway will also be widened from four to six lanes, with 1km of the road moved underground.

Zuidplus, a joint venture between Hochtief (42.5%), Fluor (42.5%) and Heijmans (15%), was initially awarded a $US 1bn design and construction contract for the project, but this will now be partially retendered. Zuidplus will complete the work agreed previously, such as the final design for the transport hub and planned construction activities linked to rail and road closures in 2020 and 2021.

Heijmans says the joint principals decided to split the project into sections due to its considerable complexity. A new approach, adjustments to the collaboration model, the contract form and the risk allocation resulted in a substantial change from a legal point of view, resulting in a need to retender.

Zuidplus will consult with the municipality and ministry on how to handle the existing project work and on the amicable termination of the contract.

“We are pleased that there will be clarity about the future of the Zuidasdok project,” says Heijmans CEO, Mr Ton Hillen. “The division of the project into sub-packages will make the project more manageable. With our knowledge and expertise we will certainly compete for a number of these sub-packages in the future. We will settle the contract amicably alongside the other parties involved. The project’s financial settlement is not expected to have any negative impact on Heijmans’ financial results.”