RUSSIAN Railways (RZD) has signed a memorandum of understanding (MOR) with the Serbian government to assist with the engineering and construction of the country’s railway infrastructure. 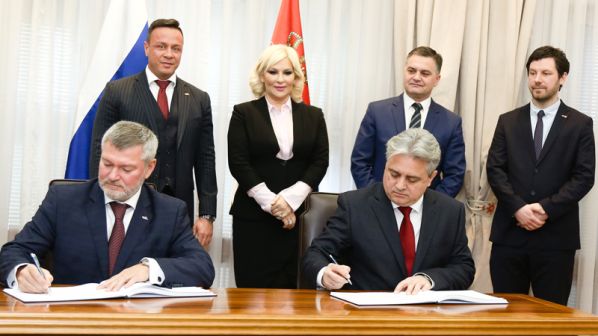 The contract was signed in Belgrade during a meeting between Russian president Mr Vladimir Putin, RZD director general and chairman of the board, Mr Oleg Belozyorov, and Serbian vice chairman of the government and minister of construction, transport and infrastructure, Mr Zorana Mikhailovich.

The MoU covers the supply of materials and construction work for the second stage of the redevelopment of the 40.4km Stara Pazova - Novi Sad section of the Belgrade - Budapest line, which is being upgraded for 200km/h operation.

The work includes building electrical infrastructure, architectural and construction facilities and traction sub-stations, as well as regulating watercourses and arranging the right-of-way.

Under the contract, RZD International will also develop a project to reconstruct and modernise the 210km Valjevo - Vrbnica line Montenegrin border, including the possibility of future development.

RZD International and track authority Infrastructure of Serbian Railways have also signed a contract for the engineering and construction of railway infrastructure and a centralised operation centre, which will control all rail traffic in the country. This project is expected to take three years to complete.

RZD has modernised and reconstructed more than 200km of railway infrastructure in different regions of Serbia since 2014, including the Pan-European Transport Corridor X and the Belgrade - Bar line, which connects Serbia and Montenegro.