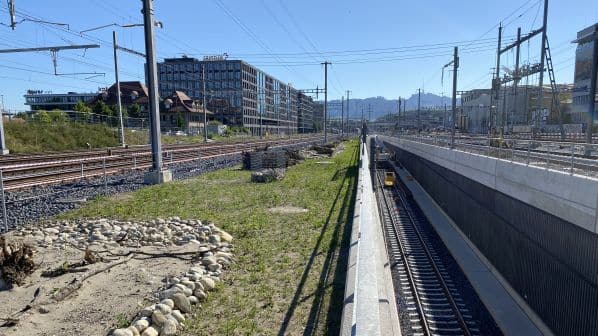 The western portal of the new tunnel at Wylerfeld.
Photo Credit: SBB

SWISS Federal Railways (SBB) has announced the completion of a grade-separation project at Wylerfeld in Bern, eliminating a bottleneck at what SBB says is the second-busiest junction in Switzerland.

Due to enter service on September 12, new infrastructure includes a 300m single-track tunnel beneath three tracks that will be used by services to and from Thun, avoiding conflicting movements with other trains.

Work on the SFr 270m ($US 279.8m) Wylerfeld unbundling project began in April 2016, and has included the reconstruction of road bridges over the tracks to provide a wider span, as well as the expansion of Bern Wankdorf station.

Once the tunnel has entered service, work will continue on final elements of the project which are due for completion in summer 2023.

Over the two tunnel portals, SBB has used construction waste to build two nature reserves covering a total of 3000m2, which have been planted with local plant species and it is hoped will attract wild bees, slow worms and lizards.

SBB says that the completion of work at Wylerfeld will enable it to introduce new services and will ensure that punctual train operation is maintained.

The project will be of benefit to commuter services, enabling further extension of the Bern S-Bahn network.

For long-distance services, it will enable SBB to restore a direct Romanshorn - Zurich Airport - Interlaken train, which will operate seven times a day in each direction from the timetable change on December 11.

SBB will also introduce additional direct services from Basle and Olten to the canton of Valais, enabling passengers to travel from Liestal to Visp and Brig without changing for the first time.

“The unbundling of Wylerfeld is of great importance for the canton of Bern, as it is a prerequisite for the further development of the S-Bahn service,” said Mr Christoph Neuhaus, head of the Construction and Traffic Directorate (BVD) at the canton of Bern.