PLANS by Britain’s infrastructure manager Network Rail (NR) for the construction of the remaining section of sea wall in Dawlish, Devon, have been approved by Teignbridge District Council. 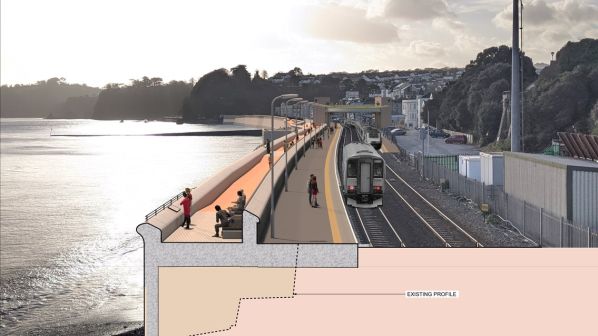 NR plans to begin work on the £80m government-funded project, designed to protect a 415m section of coastal railway on the Exeter - Plymouth main line between Coastguards and Colonnade breakwaters, later this year.

The work will include the construction of a new high-level sea wall incorporating a wider public promenade, ramped pedestrian access to the bridge, as well as a new accessible footbridge incorporating lifts for Dawlish station.

The news follows the opening of the first section at Marine Parade in July.

“The new sea wall will protect this vital rail artery to the south west for the next 100 years,” says Mr Mike Gallop, Network Rail’s director for the Western Route.

“Establishing a resilient main line is a vital aspect of PRTF’s work, and the Dawlish sea wall has always been a priority since the storm damage in 2014,” says Ms Andrea Davis, chair of the Peninsula Rail Task Force (PRTF) and councillor for North Devon. “We have already seen the benefits from the first phase of works, with a £5m uplift to the local economy, and the next phase will build on these benefits.”