The project involves building a branch line to serve the King of Prussia area in Philadelphia. 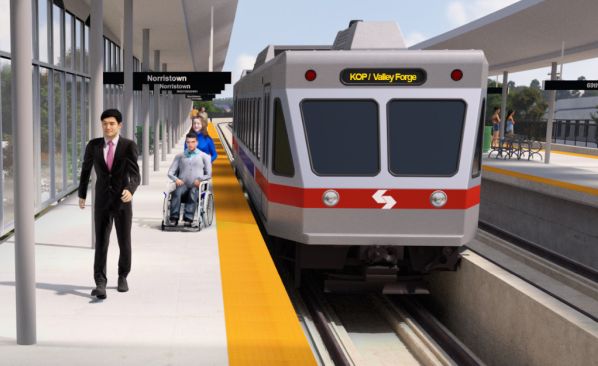 Artist's impression of a station on the King of Prussia light metro extension.

SOUTHEASTERN Pennsylvania Transportation Authority (Septa) has released a Request for Proposals (RFP) for the final design of the King of Prussia Rail (KOP) project to construct a 6.4km branch line from the light metro Norristown High Speed Line (NHSL) into King of Prussia.

The project involves building a triangular junction between Hughes Park and DeKalb Street stations at the northern end of the NHSL in Philadelphia. The new branch line will then head west through the King of Prussia area where five new stations will be constructed.

KOP Rail was issued a combined Final Environmental Impact Statement/Record of Decision by the Federal Transit Administration (FTA) in January 2021 and entered the project development phase of the FTA’s Capital Investment Grant programme in October 2021.

Septa included $US 390m for KOP Rail in its proposed fiscal year 2023 capital budget and 12-year programme. The project is a key component of Septa Forward strategic plan.