The accident in 2013 was caused by an undetected track fault. 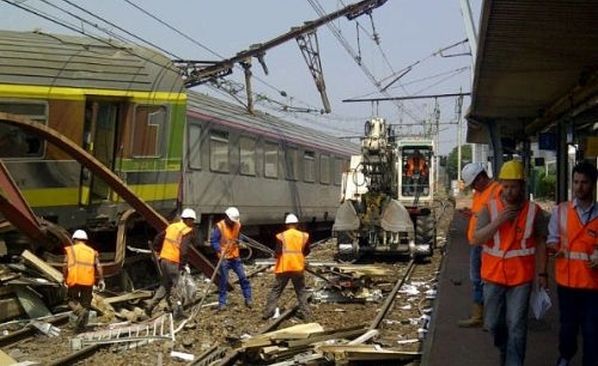 The crash scene at Brétigny-sur-Orge following the accident.

A French court has finally ruled on the culpability for a fatal accident which occurred on July 12 2013 when the 17.14 Paris Austerlitz - Limoges locomotive-hauled passenger train derailed at 137km/h (below the 150km/h speed limit) as it approached Brétigny-sur-Orge station, 31km south of Paris.

The train split in two with some of the Corail coaches turning on their side and some mounting the platform. Seven people were killed, of whom four were on the platform. Another 70 people were injured, nine of them seriously, while 227 people were treated for minor cuts and bruises.

Investigations showed that the accident was caused by a fishplate rotating until it blocked the frog in a switch 200m north of the station. One bolt holding it in place had broken causing the other three to work loose. The track had been inspected eight days before the accident, but the member of staff carrying out the inspection failed to detect the problem. As a result, SNCF increased its surveillance of the network after the accident.

A judicial investigation started on September 15 2014 under which infrastructure manager SNCF Network was accused of manslaughter. Responsibility was later transferred to French National Railways (SNCF) group.

The final trial ran from April 25 to June 17 2022 at the end of which the Public Prosecutor asked for the maximum sentence of a €450,000 fine (taking into account a previous accident in Troyes) plus compensation to the victims.

On October 26, SNCF was fined €300,000, while Mr Laurent Waton, who made the final track inspection, and SNCF Network were found not guilty. The court said that SNCF had not organised sufficient inspections of a safety-critical component. In its defence, SNCF claimed that the breakage in the bolt was undetectable. In summing up, the Public Prosecutor claimed that SNCF was “in denial.”