Bill passed by Paraguayan senate paves way for construction of 43km line from capital to Ypacarai. 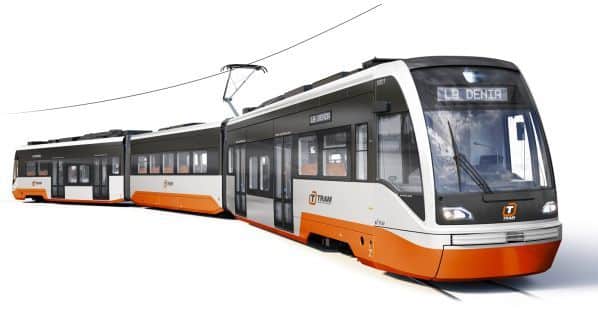 How a tram-train on the light rail line may look once the system is operational.
Photo Credit: IRJ

A Korean consortium is set to win a contract to build a light rail line in Asunción, the capital of Paraguay, that will be Korea’s first turnkey railway contract in the export market.

The Korean Ministry of Land, Infrastructure and Transport announced on December 2 that the previous day the upper house of the Paraguayan Congress, the senate, had passed a special bill for the light rail project. According to the bill, the consortium due to undertake the project will be led by the Korea Overseas Infrastructure and Urban Development Corporation (Kind).

However, the bill has still to be passed by the lower house of the Paraguayan Congress, the Chamber of Deputies, and so the contract is expected to be concluded during 2023.

The $US 1.6bn project comprises $US 600m in construction costs and $US 1bn in operation and management costs. It involves building a 43km line eastwards between Asunción and the lakeside town of Ypacaraí.

The consortium is expected to take four years to build the line, which will be called the Ypacaraí - Asunción Commuter Railway (Asunción Light Rail System). The consortium will also operate the line for 30 years.

A feasibility study into the project was completed by Kind, a subsidiary of Korea’s Ministry of Land, Infrastructure and Transport, in May 2021, when it was announced that tenders to construct the line under a $US 300m public-private partnership (PPP) would be released later that year.

At the time, the line was to be built in four sections. The route would be double track on the 15km from Asunción Central to Luque and then single track on the remaining 28km from Luque to  Ypacaraí.

The Paraguayan light rail deal is particularly significant as South Korea’s overseas construction industry is currently experiencing a slump. From an all-time high of netting contracts worth $US 71.6bn in 2010, since then the sector has achieved totals of only $US 20-30bn per year.