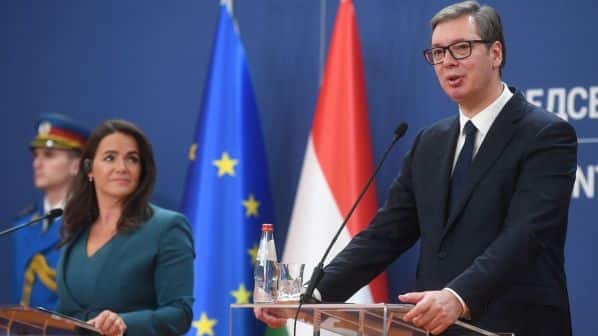 PRESIDENT of Serbia, Mr Aleksander Vučić, chose a visit by his Hungarian counterpart, Ms Katalin Novak, to make an announcement on the crucial part that a new rail connection between the two countries will play in the strengthening of cross-border relations.

Work began on upgrading the Hungarian section of the 350km Budapest - Belgrade route in November 2021. At that time the upgrade of the 166km mostly single-track route from Soroksár on the outskirts of Budapest to Kelebia on the Serbian border was to include rebuilding 339km of track and installation of ETCS Level 2 by 2025.

This was to facilitate an increase in line speed from the current average of between 40 and 80km/h to 160km/h, with the line designed for operation up to 200km/h. The upgraded line will offer a journey time of 2h 45min between Belgrade and Budapest, Vučić says.

The Hungarian part of the project, which also involved rebuilding five stations and renovating eight others, is financed through loans from Chinese banks, and in August 2021 China Civil Engineering and China Railway 11th bureau were awarded a contract to undertake the civil engineering and track upgrades for two Serbian sections of the line.

Vučić also said he was working with the Hungarian government to solve the problem of delays at the border, but this was caused by Serbia’s position outside the European Union (EU).

Serbia has called for the establishment of “green lanes”, guaranteeing the free flow of essential goods such as food and medical supplies by granting them priority at borders through the electronic exchange of information between national authorities.

This would enable border crossings to operate around the clock and has been supported by most rail freight operators, according to the Serbian government.

“Serbia, as part of the Open Balkans initiative, requested that green lanes be opened on the border with Hungary, which would allow authorised traders and producers to pass through,” said Vučić. He noted that Novak had said that the delays could be solved by introducing an arrangement similar to the Schengen Zone, “so that vehicles from our country would have freedom of movement before full membership of the EU.”

Switzerland, Norway and Iceland have for some years been part of the Schengen Zone allowing unrestricted movement across EU borders despite not being members of the EU itself.