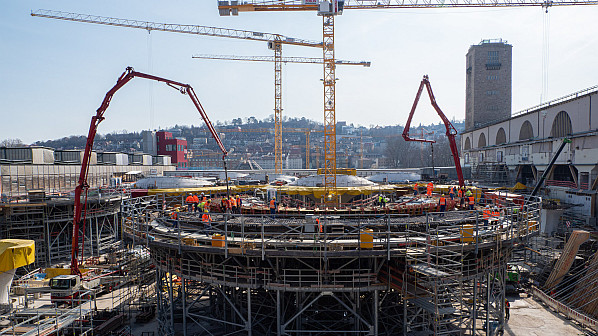 GERMAN Rail (DB) has confirmed that the cost of the Stuttgart 21 project has risen by €950m to €9.15bn due to drastically higher construction prices and geological risks.

The DB supervisory board has agreed to create a supplementary provision of €640m that can cover further risks and forecast uncertainties. Using this will require permission from the board.

DB says that despite the cost increase, the project will still be completed in time for the December 2025 timetable as planned.

The cost increase was revealed following a DB supervisory board meeting which discussed the findings by an expert review into the project. This began in late autumn 2021.

The review found that there are considerable price increases for construction companies, suppliers and raw materials. The geologically demanding subsoil in the urban area is another factor in the cost increase.

Stuttgart 21 involves the construction of a underground through platforms beneath the main station and a 9.5km tunnel connecting to a new airport station to meet a 10km line to Wendlingen. A second tunnel will run under the south side of the city to Obertürkheim, where it will emerge to join the existing line to Esslingen. A new chord south of Valhingen will allow trains arriving from the Singen direction to serve the airport station and run into the main station from the south.

This will significantly increase capacity in the Stuttgart hub and halve journey times between Stuttgart and Ulm. From December this year, following the opening of the Wendlingen - Ulm high-speed line, long-distance journey times will initially be accelerated by 15 minutes.

The Wendlingen - Ulm high-speed line is one of IRJ’s 20 Projects to watch in 2022. The feature was published in the January edition of the magazine. Digital subscribers can read the article here.