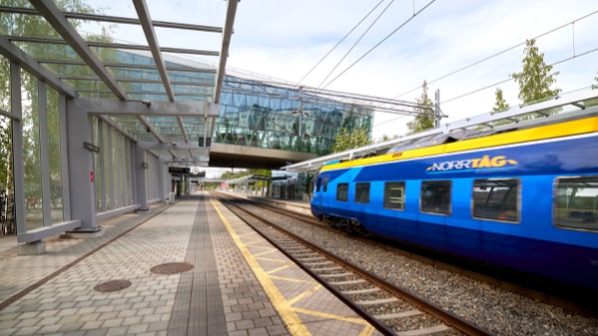 The Swedish government has given the go-ahead for the next phase of the North Bothnia line.
Photo Credit: Shutterstock.

SWEDEN’S government has given the go-ahead for completion of the Skellefteå - Luleå section of the North Bothnia line, which would effectively complete the Umeå - Luleå project.

The government commissioned the Swedish Transport Administration (Trafikverket) in June to present a proposal for a new national transport infrastructure plan for the 2022-23 period. The commission states that sections of the North Bothnia line included in the existing plan, Umeå - Dåva and (Umeå) Dåva - Skellefteå should be completed.

The commission also states that construction of the remaining  Skellefteå - Luleå section should be completed during this period.

Construction of the first 12km from Umeå to Dåva began in 2018, with planning for the section to Skellefteå at an advanced stage. This would take the railway halfway to Luleå.

This is all part of the North Bothnia Line project, which is an extension of the Bothnia Line between Örnsköldsvik and Umeå that opened in 2010. It will serve the coastal region in the most populated part of northern Sweden.

When all phases of the line are complete, the mixed-traffic railway is expected to halve journey times between Umeå and Lulea. The line will also reduce the transit distance for freight traffic to and from northern Sweden and support increases in the maximum train weight to 1600 tonnes, compared with 1000-1100 tonnes on the existing north-south corridor through Norbotten county.