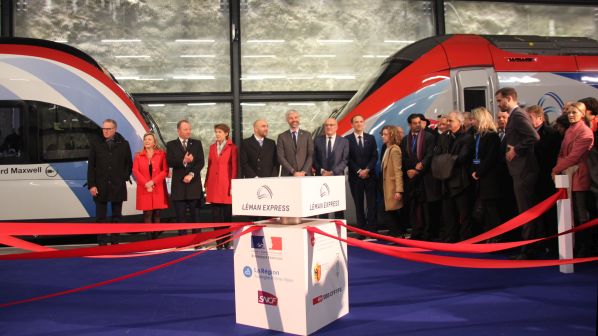 The new service, which will start on December 15, has been made possible through the SFr 1.8bn ($US 1.82bn) Ceva project to link the Swiss and French rail networks.

The Swiss part of the project, which covers 14km and has two tunnels, a river bridge and two new stations, cost SFr 1.6bn. Funding was split 44:56 between the canton of Geneva and the Swiss government. The work also included extensive modifications to Geneva Cornavin and Annemasse stations and modernisation of 18 stations in France.

The entire 230km Léman Express network operates on six lines serving 45 stations and a population of more than 1 million. The new service operates from Coppet via Geneva Cornavin and Eaux Vives to Annemasse in France where it splits to run to Evian-les-Bains, and via La Roche-sur-Forun to St-Gervais-les-Bains-Le Fayet and Annecy. Up to six trains/hour/direction will operate on the core section.

The network is operated by Lémanis, a joint venture of SBB and SNCF, using two fleets of multi-system trains. These comprise 40 Flirt EMUs supplied by Stadler and 17 Alstom Coradia Polyvalent EMUs. Alstom equipped both fleets with ETCS Baseline 3 onboard equipment.