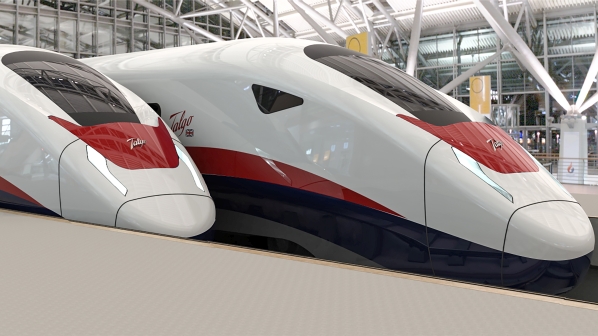 Chesterfield in central England and Longannet in central Scotland have been selected from an original list of 30 locations, with a final decision expected in mid-November.

“The establishment of a manufacturing facility in Britain is a significant part of Talgo’s future strategy,” says Talgo president, Mr Carlos de Palacio. “Talgo’s aim is to establish true manufacturing, rather than assembling from parts made elsewhere. This means that we will draw from materials and expertise across Britain. This keeps more money in the British economy, and creates more skilled long-term jobs.”

De Palacio says Talgo is also looking to develop a British testing centre with acceptance ability to ensure a smooth and faultless introduction of new trains into service.

Talgo is one of five bidders vying for a £2.75bn contract to supply a minimum of 54 360km/h trains for operation on Phase 1 of Britain’s HS2 high-speed line linking London and Birmingham.

Bombardier Transportation and Hitachi Rail agreed to join forces to bid alongside Alstom and Siemens, while HS2 Ltd has also invited CAF to join the list of shortlisted bidders so there will still be five bidders when HS2 Ltd invites the companies to tender later this year. The contract is expected to be awarded in late 2019 and the fleet must be operational by 2026 in time for the opening of the high-speed line.