TAMPERE Tramway, which is preparing to commission a 15km light rail line due to open in 2021, has taken delivery of an HSG-city rail grinder from Vossloh. 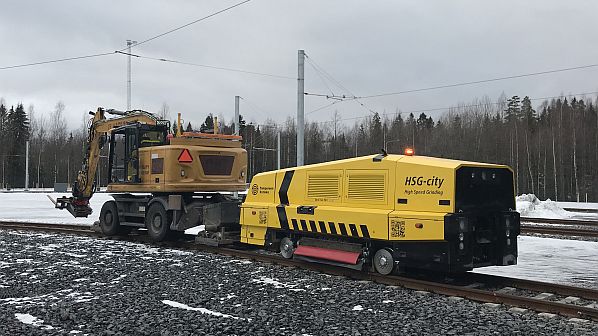 The contract for the compact HSG-city grinding machine includes a spare parts package and a service agreement covering the machine’s annual maintenance.

The machine will be used initially to grind off the mill scale on the new rails. It will then be used to prevent head checks and remove grease residue, which is mainly caused by fallen leaves, air pollution or rainfall after a long period of dry weather.

A greasy film builds up on the rails and becomes a safety hazard when accelerating from a standstill or braking. Grinding off the grease improves traction between wheel and rail and increases the rail’s electrical conductivity.

“We want to be well prepared for traffic,” explains Tampere Tramway’s fleet manager, Mr Ali Huttunen. “We were referred to a customer in Germany, where we were able to observe the HSG-city in action and see for ourselves the benefits in terms of extending the service life of rails.”