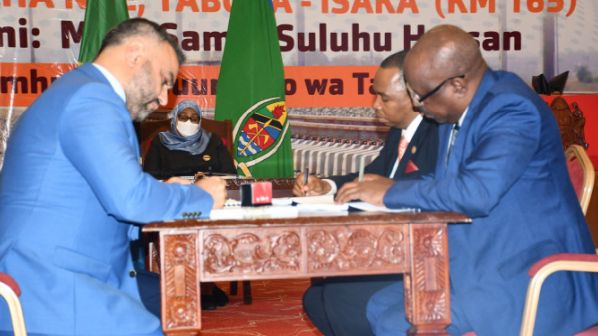 TRC has also signed a contract with Korean national operator Korail to provide training for construction and for operations following the opening of the line.

The Tabora - Isaka section includes 130km of main line and 35km of branches. The construction contract will run for 42 months, with six months for testing.

TRC awarded Yapi Merkezi a $US 1.9bn contract in January to build the 358km Makutupora - Tabora section of the SGR.

The signing of the contracts was overseen by the president of Tanzania, Ms Samia Suluhu Hassan, on July 4 in Dar es Salaam. Samia said the agreements were important in furthering the SGR project, and would boost the economy and increase domestic rail expertise.

“These agreements are of special importance as they complete the first phase of our modern railway line from Dar es Salaam to Mwanza and begin preparations to build the capacity of Tanzanians to operate and manage our railways instead of relying on foreign experts,” Samia says.

The director general of TRC, Mr Masanja Kungu Kadogosa, said the government had so far invested Shillings 6.4 trillion ($US 2.7bn) in the SGR project.