The contract was awarded to CCECC and CRCC. 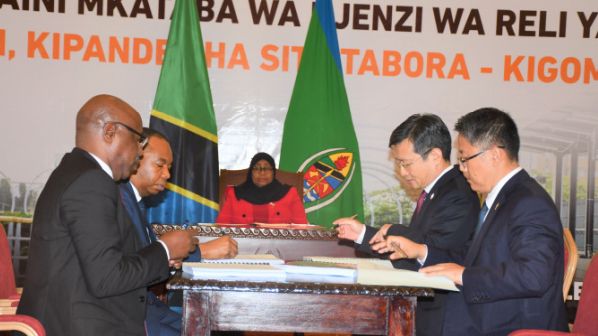 The signing ceremony was witnessed by the president of Tanzania, Dr Samia Suluhu Hassan.

The agreement was signed on December 20 by the director general of the Tanzania Railway Corporation (TRC), Mr Masanja Kadogosa, and the executive director of CCECC Tanzania, Mr Zhang Junle, and witnessed by the president of Tanzania, Dr Samia Suluhu Hassan.

The four-year contract includes the construction of a 411km main line and 95km of branch lines, along with 10 stations and two large freight yards at Uvinza and Katosho.

“This Tabora - Kigoma line and the Uvinza - Msongati line will open up Tanzania and connect it with the Democratic Republic of Congo where there is a lot of cargo that needs to be transported through our port (at Dar es Salaam),” Suluhu says.

The minister of construction and transport, Mr Makame Mbarawa, said it was important to develop international and external transport connections, which would improve the economy by opening up new opportunities for business and investment.