The bridge was closed in October 2021 following an accident in May 2021. 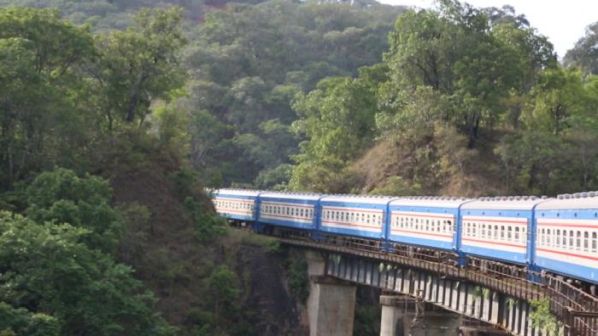 The Mukuba Passenger Train crossing a bridge in the Mpanga-Kitete area of Tanzania.
Photo Credit: Tazara

THE Tanzania Zambia Railway Authority (Tazara), which operates the 1860km 1067mm-gauge railway linking Dar es Salaam, Tanzania, with New Kapiri-Mposhi, Zambia, has announced the full resumption of passenger services following the repair of the Chambeshi Bridge and the temporary suspension of operation in Zambia due to a freight train accident.

The Chambeshi Railway Bridge reopened to freight traffic on September 16 after closing for repairs on October 13 2021 following a freight train accident on May 13 2021.

However, the line was closed again following an accident in the Msanza-Kapwila area in Nakonde District on September 22, when a train consisting of two locomotives and 26 wagons derailed on a curve. The train, run by private open-access operator African Inland Container Depot (AFICD), was carrying 1414 tonnes of freight from the Port of Dar es Salaam to Ndola, Zambia. 19 wagons overturned during the accident, damaging the rails and sleepers.

The Mukuba passenger service in Zambia, which was previously restricted to operating between Kasama and Nakonde, will begin operating through to New Kapiri-Mposhi on October 13, while the Mukuba and Kilimanjaro services will resume cross-border operation from New Kapiri-Mposhi and Dar es Salaam, respectively, from October 18.