Commercial high-speed services are due to start this December. 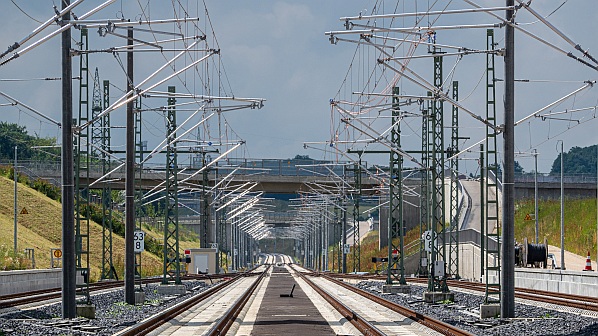 TESTING of electric trains on the 59.6km €4.16bn Wendlingnen - Ulm high-speed line will commence this month after German Rail (DB) confirmed it had energised the 15kV ac overhead line equipment on the new railway from January 31.

The new high-speed line is due begin commercial operation from December 11. Before then, test operations will commence on the 250km/h railway, with trains operating at gradually increased speeds until they reach 275km/h.

Initial testing began on the line in December. The new railway crosses the Swabian Alb mountain range and will connect the existing Neu-Ulm station in the east with Stuttgart 21 project in the west. Both freight and regional traffic will operate on the new line as well as high-speed services. Journey times between Stuttgart and Ulm will be reduced from 54 minutes to 28 minutes.

A train carrying 120m-long rails became the first to operate on a completed section of the Stuttgart 21 railway on February 8. The works train stopped just short of Stuttgart Central station after operating through the Feuerbach Tunnel at around 15km/h.

The rails were unloaded at a junction structure where the Feuerbach Tunnel and Cannstatt Tunnels meet. DB says it expects to start laying track from Bad Cannstatt to the junction soon.

The Wendlingen – Ulm high-speed line is one of IRJ’s 20 Projects to watch in 2022. The feature was published in the January edition of the magazine. Digital subscribers can read the article here.