Phase 1 is reported to be only 15% complete when the target for this stage is 37%. 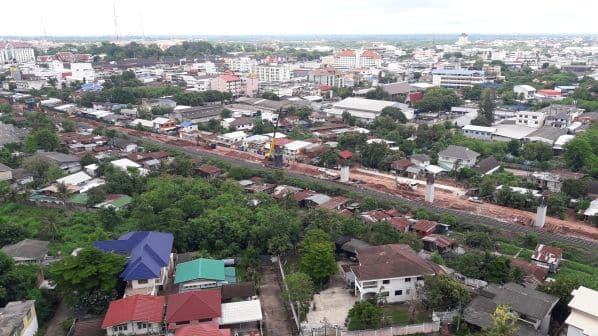 An aerial view of an early stage of the Phase 1 construction project in Khon Kaen province in May 2017.
Photo Credit: Petebutt/Wikipedia Commons

THE Thai-Chinese high-speed railway construction contract may need to be renegotiated, the Bangkok Post reports, quoting a Thai transport ministry source, as construction of the project’s Phase 1 between Bangkok and Nakhon Ratchasima is falling behind schedule.

The Baht 50.6bn ($US 1.4bn) main contract for the 253km section, known as Contract 2.3, covers the railway system, rolling stock, technology transfer and staff training and has a deadline for completion of March 2026 - a target date which now looks set to have to be renegotiated.

Phase 1, which was officially launched by the Thai government in October 2020 after initial disputes with China over financing the project and then several postponements, is divided into 14 different contracts and is currently only 15% complete. The official target for this stage of the project is 37% completion, the Bangkok Post reports that ministry source as saying, based on information from a Thai-Chinese joint committee meeting held on November 7.

The meeting was chaired by Thailand transport minister, Mr Saksayam Chidchob, and attended by a deputy director of China’s National Development and Reform Commission (NDRC).

The delays have been attributed to Covid-19 restrictions, hold-ups in land expropriation and relocation of public utility lines from the construction site.

Renegotiation of the first phase completion date may have a knock-on effect on the 356km Phase 2 section from Nakhon Ratchasima to the border province of Nong Khai, as the original plan was that this would be completed in its entirety three to four years after the first phase is completed.

Saksayam has subsequently announced that a progress report presented at the November 7 meeting is to be sent to China’s president, Mr Xi Jinpeng, through the NDRC. He also announced that Laos will take part in a meeting with Thailand and China early next year for formal discussions regarding a plan to connect the Thai-Chinese high-speed railway with its own rail network.

Saksayam added that China has expressed its willingness to cooperate in a plan for construction of a new Thailand-Laos friendship bridge close to the existing ones. This follows a meeting in October between Thailand’s prime minister, Mr Prayut Chan-o-cha, and Laos’s premier, Mr Phankham Viphavanh, at the foundation stone ceremony for the countries’ fifth friendship bridge, that more friendship bridges should be built between the two countries to encourage further economic development.

A new 7.5km line running from Thanalaeng, on Laos’s border with Thailand, to the Laos capital of Vientiane is due for completion at the end of this year [IRJ story August 25, 202].

In March China’s Yunnan Province issued a three-year action plan aiming to accelerate the connection between the China-Laos railway, which opened in December 2021, and Thailand’s railways [LINK to IRJ March 8, 2022 story]. Another objective was to start construction of a Taraleng - Nong Khai, Thailand line, the latter being the end point of the projected phase 2 of Thai-Chinese high-speed line mentioned above.

The final Bangkok - Nong Khai high speed line has been planned to eventually form part of the central section of a larger Kunming, China - Singapore railway. It is proposed that the rolling stock to be used will be CRRC-manufactured Fuxing Hao CR300AF high speed rail EMUs with a maximum speed of 300km/h, though operating speeds in Thailand will be 250km/h.