The line will carry ore from Mayoko to the future iron-ore port in Pointe-Noire. 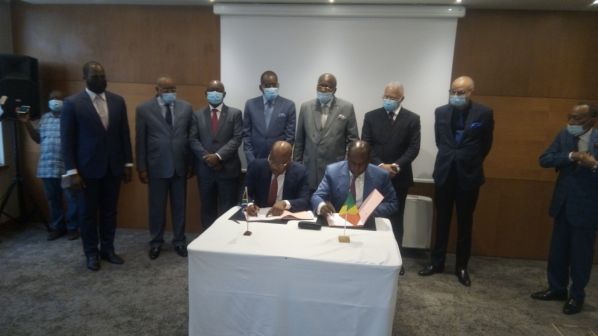 SAPRO Mayoko, a mining company with operations in southwest Congo, has signed a contract worth CAFr 600bn ($US 1.08bn) with Thelo DB, a South African-based partnership between Thelo and German Rail (DB) subsidiary DB Engineering & Consulting, to construct a 412km line from its mining operations in the Niari region to the future iron-ore port in Pointe-Noire.

The contract between Sapro Mayoko and Thelo was signed in the capital of Congo, Brazzaville, on July 9, in the presence of several members of the government, including the ministers in charge of mines, Mr Pierre Oba, and transport, Mr Jean Marc Thystère Tchicaya, as well as the South African ambassador to the Republic of Congo, Mr Abel Mxolisi Shilubane.

Feasibility studies have been completed for the new line, which will carry up to 250 million tonnes of ore annually. Construction is expected to take five years.

The agreement also includes the rehabilitation of the 182km Mbinda - Mont Mbelo line, formerly operated by the l'Ogooué Mining Company. This will allow Sapro Mayoko to export 2 million tonnes of ore per year, potentially increasing to 12 million tonnes over the next four years.

“We are going to work with Sapro as part of the development of their activities,” says Thelo DB CEO, Mr Ronny Ntuli. “There are several reasons for us to participate in this great adventure, because it is time for us Africans to develop our industrial skills in order to show the world what we are capable of doing.”

The project is being supported by the BMCE Bank International through its subsidiary La Congolaise Des Banques.

“We are pleased with the outcome of this solemn agreement thanks to the support of the Congolese government,” says Sapro Mayoko president, Mr Paul Obambi. “From now on, the value chain from production to export of Mayoko iron is in place. For the railway part, this project will be carried out by Thelo DB, a consortium bringing together a South African and German group.”