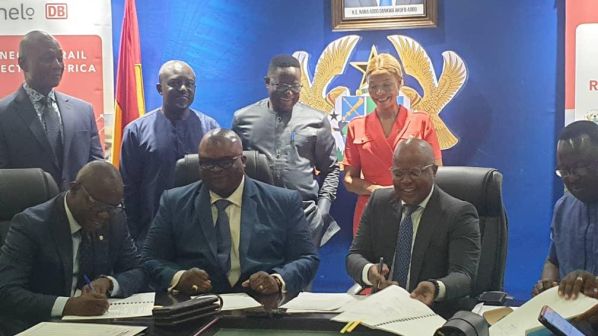 THE Thelo DB consortium of Thelo DB and Transtech Consult has signed a 25-year agreement with Ghana Railway to develop and commission the Western Railway, a 299km network connecting the port of Takoradi with Obuasi, Awaso and Eduadin.

According to the consortium, the fully integrated development model adopted for the project is innovative for the African railway sector, with the Western Railway to be funded “on a ring-fenced project finance basis.”

Thelo DB will undertake project planning, including feasibility studies, demand analysis, and preliminary and detailed design, and will provide consultancy services for procurement.

Under the implementation phase, the consortium will be responsible for systems engineering design, construction supervision, design review, audit systems engineering, and the testing and commissioning of rolling stock and infrastructure.

Thelo DB will also undertake operations and maintenance management, acting as the early train operator and providing consultancy services for the operation and maintenance of infrastructure and rolling stock, as well as training.

The consortium says that the Western Railway project will transform Ghana’s existing 1067mm-gauge network “into a modern, robust and integrated railway system” running from the port of Takoradi to Huni Valley and Obuasi, with branches from Dunkwa to Awaso and from Nyinahin to Eduadin.

Upgraded infrastructure will ensure “interoperability of railway systems” and there will be a new, standardised rolling stock fleet and associated maintenance facilities. There will also be “operational integration” with other transport infrastructure.

“Currently, the transport of freight, including minerals and other bulk commodities, along the Western Corridor is predominantly by means of the road network due to the poor state of the railways,” says minister of railway development, Mr John-Peter Amewu.

According to Amewu, the Western Railway has huge potential to carry bulk freight, with annual manganese and bauxite traffic forecast at 7 million and 15 million tonnes respectively.

“An additional 5 million tonnes of bauxite is estimated to be mined and transported annually from the new bauxite deposit at Nyinahin using the railway,” he says.

Bulk Oil Storage and Transportation (BOST) is forecast to use the Western Railway to move over 1.5 billion litres of oil products, and other commodities that are expected to move by rail include cocoa, timber and cement.

“Rail transport is therefore critical to the success and achievement of all these traffic projections since it provides a cheaper and more efficient means of transporting such commodities,” Amewu says.

“The intention of this project is to develop, implement and operationalise the Western Railway as a fully integrated railway system to enable efficient transport of freight and passengers,” says Thelo DB Chairman, Mr Ronnie Ntuli.