The new line is part of major railway expansion plan in the United Arab Emirates. 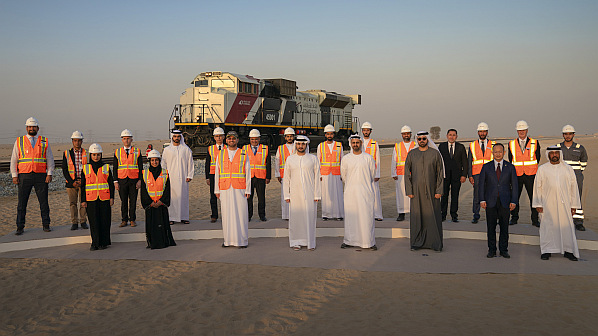 THE final section of track on the 256km line linking Abu Dhabi and Dubai was installed during a ceremony on March 1.

The Abu Dhabi - Dubai line comprises packages 2B and 2C of Phase 2 of the Etihad Rail project, which will expand the network to Ghuweifat on the border with Saudi Arabia and east to the city of Fujairah on the Gulf of Oman to create a 1200km network. Work on Phase 2A the 139km section from Ghuweifat to Ruwais, the terminus for Phase 1, was completed in September 2021. Phase 1 is a 264km line from Shah to Ruwais, used to transport sulphur granules, which was completed in January 2016. Work continues on Phase 2D, the 145km line from Dubai and Sharjah to Khorfakkan and Fujairah.

China Railway Construction Corporation and Ghantoot Transport & General Contracting are responsible for tracklaying on the Abu Dhabi - Dubai line, which took place in both directions from a construction hub at Saih Shuaib. The contractors won a Dirhams 4.4bn ($US 1.2bn) contract in June 2019 for package 2B, comprising the 216km route from Liwa, near Tarif, to Saih Shuaib, which includes links to Khalifa Industrial Zone, Abu Dhabi, Khalifa Port and Industrial City of Abu Dhabi, and the 94km Sharjah - Jebel Ali package 2C, comprising 74km of line in Dubai and a 20km branch to Jebel Ali port.

While a date for the start of operation has not yet been announced, this section of the line is set to play a pivotal role in developing the United Arab Emirates (UAE) national railway network. There are 29 bridges, 60 crossings and 137 drainage channels on the Phase 2b and 2C route. 13,300 workers were employed on the project recording more than 47 million working hours.

Maktoum bin Mohammed said that the project will increase the competitiveness of the UAE and strengthen the spirit of union between the Emirates. Theyab bin Mohamed said the railway will contribute to the promotion of sustainable development in the UAE.

The completion of the line between Abu Dhabi and Dubai is within the framework of the UAE Dirhams 50bn ($US 13.6bn) Railway Programme, announced in November, and part of the government’s “Projects of the 50” development programme. The Railway Programme includes a national network of projects that would link the seven emirates, which are expected to create up to Dirhams 200bn in economic opportunities.

For detailed data on infrastructure projects in the Middle East, subscribe to IRJ Pro.