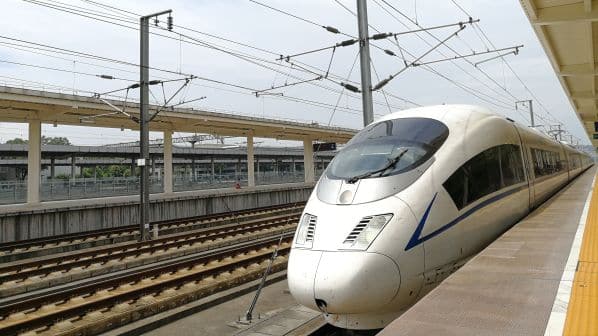 A Chinese high-speed train at Fuzhou station, one end of the new line to Xiamen via the three "over-sea" bay bridges.
Photo Credit: Shutterstock

TRACKLAYING on what has been called China’s first sea-crossing high-speed railway was completed on August 30 in Fujian Province in the east of the country.

The 277km railway links Fuzhou, the provincial capital, with the port of Xiamen. Designed for trains operating at speeds of up to 350km/h, and with eight stations along the route, it is expected to cut the journey time between the two cities to just one hour.

The new railway will cross three coastal bays - most notably Meizhou Bay, where a 14.7km over-sea bridge has been built between Putian and Quanzhou, as China’s first reinforced cable-stayed bridge to be built on a high-speed railway.

The teams constructing the line had to overcome the complicated marine and hydrological environment and also adopted advanced methods to improve tracklaying efficiency. On average around 6km of track was laid per day, according to China Railway Nanchang Group.

Construction of the high-speed line is expected to be completed in 2023.

For details on rail projects in China and around the world, subscribe to IRJ Pro.